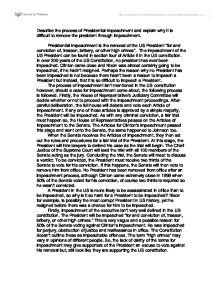 Describe the process of impeachment and explain why it is difficult to remove the President through inpeachment.

Describe the process of Presidential impeachment and explain why it is difficult to remove the president through impeachment. Presidential impeachment is the removal of the US President "for and conviction of, treason, bribery, or other high crimes". The impeachment of the US President can be found in section four of Article II in the US constitution. In over 200 years of the US Constitution, no president has ever been impeached. Clinton came close and Nixon was almost certainly going to be impeached, if he hadn't resigned. Perhaps the reason why no President has been impeached is not because there hasn't been a reason to impeach a President but instead, that it is so difficult to impeach a President. The process of impeachment isn't mentioned in the US constitution however, should a case for impeachment come about, the following process is followed. Firstly, the House of Representative's Judiciary Committee will decide whether or not to proceed with the impeachment proceedings. After careful deliberation, the full house will debate and vote each Article of Impeachment. If any one of those articles is approved by a simple majority, the President will be impeached. As with any criminal conviction, a fair trial must happen so, the House of Representatives passes on the Articles of Impeachment to the Senate. The Articles for Clinton's impeachment passed this stage and went onto the Senate, the same happened to Johnson too. ...read more.

In the Clinton case, the President received 50% of the Senate vote in favour of his conviction but, the rules state a 67% vote must be received. Most say that Nixon would have definitely been convicted, had he been impeached. However, Nixon had resigned just before impeachment proceedings began. To get through the whole impeachment proceedings is extremely unlikely as so many tight and difficult quotas need to be met. Thirdly, the impeachment of the President, who is the head of the executive, is going to significantly disrupt government. This can have effects on the US economy and the passing of importantly vital legislation. Instead of going through an impeachment trial, Nixon resigned in 1974 which lowered the length of disruption to government. It could also be argued there are already sufficient checks on Executive power such as the separation of power within government. The President is held to account by both the Judiciary and Congress (the legislature). However, there does have to be an appropriate way of removing the President for crimes such as treason and bribery and other high crimes. It could be argued that the threat of impeachment is sufficient to achieve this. It certainly worked with Richard Nixon in 1974 who was a very corrupt President and resigned because of fear for being impeached. However, his Vice President then stepped up to become President and of course, used his power to pardon Nixon of his crimes so, perhaps Nixon did get away with not being held to account. ...read more.

It could be concluded that the Presidents who are likely to be impeached and removed, resign beforehand whereas those that are impeached but unlikely to pass the Senate will stay on. Bill Clinton is only the second case of impeachment in the US history. Like Johnson, he escaped being convicted in the Senate and also like Johnson he did receive at 50% of the Senate vote to be impeached for an article. Clinton escaped impeachment because a two thirds majority is required. So, both of the Presidents that have been through the impeachment process have escaped conviction because a two thirds majority is required, instead of a simple majority. If a simple majority was required, cases of Presidents being removed from office may actually exist. Bill Clinton is another President who is known for scandal, specifically to do with his personal life. He was impeached for perjury, obstruction of justice and malfeasance in office. The most worrying statistic in the Impeachment debate is that Presidents have been removed from office via assassination and never removed via impeachment. Although the constitution deals with checks on the executive, American politicians may have to accept that the President isn't appropriately held to account for his crimes such as Nixon, who was pardoned for his crimes and escaped conviction. To conclude, the process of impeachment isn't sufficient in removing a President but, perhaps the threat of being impeached is enough to keep a President in check. Impeachment may work as a deterrent but, not as a real method of Presidential removal. ...read more.