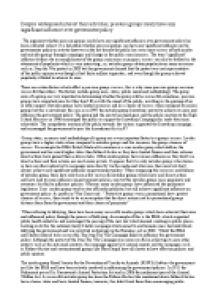 Despite widespread interest their activities, pressure groups rarely have any significant influence over government policy. Discuss.

have lead to some influence on government policies, most of the outsider groups raise popularity and awareness but fail to influence policies. Whereas many insider groups have influenced the parliament legislature. Core insider groups tend to stay off media publicity, but still achieve significant influence on government policy. As professor Wyn Grant said : '' Protective groups versus promotional have greater chances of success, there tends to be an assumption that the direct action used by promotional groups distance them from the government and their chance of prosperity'' When referring to lobbying, there have been many successful insider groups which have achieved their aims and influenced policy through the process of lobbying. An example of this is the BMA which supported public health initiatives and encouraged the passing of the new law which banned smoking in public places. Linking on to this the national charity Shelter campaign which aimed to end homelessness had individuals lobbying the government and was involved in drawing up the Homeless act in 2002. Whilst the BMA and Shelter showed to be successful, The Stop The War Campaign failed to influence the government policy. ...read more.

The use of Outrages direct action in 2009 resulted in the arrest of the members of the group. The Fawcett Society failed to achieve its aim to achieve its aims of women?s representation in politics and public life; pay, pensions and poverty as women are still getting paid less than men. In conclusion there are more examples of insider groups being successful in influencing the governments policies and they have influenced the governments policy more regularly. Compared to insider groups, outsider groups have had more media coverage and this has shown to help them in achieving their aims as the media has contributed to changes in policies, the work of Greenpeace and Plane Stupid contributed to the third runway at Heathrow Airport. Outsider groups have had some success in influencing government policy but it has been more rare and this can be due to their lack of consultation by government and lack of access to the governments corridors. Overall both insider and outsider pressure groups have a significant impact on government policy and it has been presented on a regular basis. ...read more.