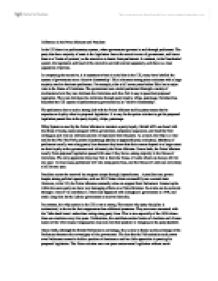 Difference in the Prime Minister and President

Difference in the Prime Minister and President In the UK there is a parliamentary system, where government governs in and through parliament. The party that has a majority of seats in the legislature forms the executive arm of government, and hence there is a 'fusion of powers', as the executive is drawn from parliament. In contrast, in the Presidential system, the legislature and head of the executive are both elected separately, and there is a clear separation of powers. In comparing the executive, it is important to bear in mind that in the UK, many have labelled the system of government as an 'elective dictatorship'. This is because strong prime ministers with a large majority tend to dominate parliament. For example, after a full seven years before Blair lost a major vote in the House of Commons. The government can control parliament through a variety of mechanisms how they can dominate the Commons and thus find it easy to pass their proposed legislation. They can dominate the commons through party loyalty, whips, patronage. ...read more.

He or she can be removed through a vote of 'no confidence', which last happened with Callaghan's government in 1974, and took a long time for the Labour government to recover from this. By contrast, the whip system in the US is not as strong. The reason why party discipline is undermined, is due to the fact congressmen has additional pressures. They are more concerned with the 'folks back home' rather than voting along party lines. This is true especially of the HOR where there are elections every two years. Furthermore, the candidate-centred nature of elections and diverse nature of the USA means Congressmen may not owe their position in Congress to the party platform. Hence forth, although the British Parliament is sovereign, this is only in theory as the sovereign of the Parliament becomes the sovereignty of the government. The fact that the PM maintains such power over Parliament means he holds a position of dominance and has little opposition in passing his proposed legislation. ...read more.

The prime minister is also subject to less scrutiny then the President. This is due to the fact there is strong party discipline which hinder scrutiny. Although the Prime minister can be scrutinised through question time, which is used to seek out flaws in government policy. It can be effective, such as when Minister Beverly Hughes resigned following questions on the administration of immigration controls. However, it is often criticised as a noisy, theatrical spectral and used for the opposition party to 'score points'. Also the Prime Minister can evade answering certain questions. Having said this, scrutiny of the government in the US is much more effective due to the fact the standing committees are much more powerful and the fact that Congress can investigate the work of the CIA and intelligence services. The fact that he is more extensively scrutinized than the Prime Minister means that his power limits his power. Conclusion-Domestic Policy PM more powerful Foreign Policy President is Prime Minister: Can also hold elections when they see fit, and hence forth this can be done to their advantage i.e a PM may hold an election at the time the economy is doing well, and hence forth may win with greater ease. ...read more.