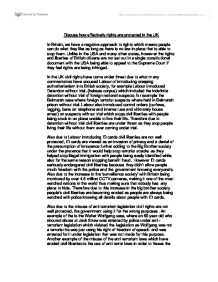 Discuss how effectively rights are protected in the UK.

Discuss how effectively rights are protected in the UK In Britain, we have a negative approach to rights which means people can do what they like as long as there is no law in place that is able to stop them. Unlike in the USA and many other states, however the rights and liberties of British citizens are not set out in a single constitutional document with the USA being able to appeal to the Supreme Court if they feel rights are being infringed. In the UK civil rights have come under threat due to what many commentators have accused Labour of introducing creeping authoritarianism into British society, for example Labour introduced Detention without trial, (habeas corpus) which included the indefinite detention without trial of foreign national suspects for example the Belmarsh case where foreign terrorist suspects where held in Belmarsh prison without trial. ...read more.

Also due to the increase in the 'surveillance society' with Britain being monitored by over 4.5 million CCTV cameras, making it one of the most watched nations in the world thus making sure that nobody has any place to hide. Therefore due to this increase in the big brother society people's civil liberties are becoming eroded as people are always being watched with police knowing all details about people with ID cards. Also due to the misuse of anti terrorism legislation civil rights are not well protected, the government using it for the wrong purposes. An example of the is the Walter Wolfgang case, where an 80 year old who shouted abuse at Jack Straw was arrested by police under anti-terrorism legislation which violated the legislation as Wolfgang was not a terrorist he was just using his right of freedom of speech and was arrested for it under legislation that was not made for this purpose. ...read more.

The police argue this helps them solve crimes catching perpetrators. However this adds to the Big Brother society which we have in the UK as the government and the police are keeping tabs on people therefore by restricting the scope on the database they are preserving civil liberties as they are stopping the government knowing details about everyone. Also in the Freedom Bill it endorses the Gibson Inquiry where Sir Peter Gibson is looking into whether the UK government was complicit in the torture of foreign suspected terrorists this shows how rights are being protected in the UK because people are looking into cases of suspected breaches of civil liberties and trying to make sure they do not happen again. Therefore in conclusion civil liberties are not well protected in the UK because the government is to authoritarian and breaches peoples civil liberties. ...read more.

3 Stars - This essay demonstrates an understanding of a number of ways in which rights are undermined in the UK - a conclusion is reached (though not properly supported) and several effective examples are deployed.
Where the essay could be improved is with more effective proof reading - watch out for sentences that are too long as they often don't completely make sense. There is also a lack of balance - the argument is one sided and does not consider a different perspective.