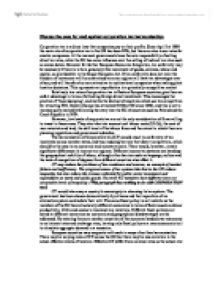 Discuss the case for and against corporation tax harmonisation

Discuss the case for and against corporation tax harmonisation Corporation tax is a direct levy that companies pay on their profits. Since April 1st 1999 the main rate of corporation tax in the UK has been 30%, but there are also lower rates for smaller companies. At the moment governments have the sole responsibility of setting direct tax rates, while the EU has some influence over the setting of indirect tax rates such as excise duties. However for further European Economic Integration, tax uniformity may be necessary if there is to be a genuinely free movement of goods, services, labour and capital, as provided for in the Single European Act. If tax uniformity does not exist the freedom of movement will be constrained as some regions will have tax advantages over others, and will therefore be more attractive to multinational companies when making plant location decisions. ...read more.

The harmonisation of Corporation tax (CT) would result in uniformity of tax incentives across member states, and thus reducing barriers that distort competition, which should be the case in an economic and monetary union. There would, however, remain significant differences in income tax regimes. Different income tax systems can handicap the geographical mobility of labour, although other barriers such as language, culture and the lack of recognition of degrees from different countries also affect it. CT may reduce the problems of tax avoidance and evasion, an example of market failure and inefficiency. The progressiveness of tax systems like that in the UK reduce inequality but also reduce the revenue collected for public sector investment and expenditure on merit and public goods. However EU members have different views on acceptable levels of inequality. ...read more.

Effective CT differ from nominal rates as the actual rate of tax depends on the extent and nature of tax relief allowances given for depreciation and for new investment; the rules used for calculating taxable profit and other incentives given to firms. It is arguably more important to realign tax bases not tax rates. In conclusion I think the argument against harmonisation is more persuasive as different countries have different tax systems for very good reasons, and the introduction of a uniform rate of tax may cause problems for some economies while benefiting others. Much would also depend on the uniform rate chosen; wherever it was higher than the present rate, it would act as a disincentive to existing firms to expand their operations and to multinational firms to set up new plants in all those cases where tax rates were a key factor in their decision. ...read more.