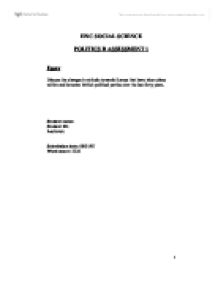 Discuss the changes in attitude towards Europe that have taken place within and between British political parties over the last forty years.

HNC SOCIAL SCIENCE POLITICS B ASSESSMENT 1 Essay Discuss the changes in attitude towards Europe that have taken place within and between British political parties over the last forty years. Student name: Student ID: Lecturer: Submission date: 08/01/07 Word count: 2226 In 2007 the European Union (EU) will reach its 50th anniversary. Despite its tender age the concept of a union between the European nations is not a relatively new one. In 1851 a French born novelist, play write, poet and politician by the name of Victor Hugo called for a "united states of Europe" [International Peace Congress, Paris 1851.] However in the early 19th century two world wars ensued crippling the economies of the European states and bringing desperation and despair throughout. From the ashes though, emerged a desire for lasting peace and new ideals comprising of supranational co-operation and integration. Between 1945 and 1950 a number of statesmen including Winston Churchill, Konrad Adenauer, Alcide de Gasperi, and Robert Schumann were strong proponents of creating a new order in Western Europe. It was however, Schuman, the French foreign affairs minister who formally proposed a European Coal and Steel Community on the 9th of May 1950. On the 18th of April 1951 the Treaty of Paris was signed, establishing the European Coal and Steel Community, this is the origins of the EU as recognised today. ...read more.

It has a strong committee system but suffers from perceived remoteness and poor voter turnout. For example in the 1999 EP elections, the average turnout was only 49.4 per cent. The European Court of Justice (ECJ) main function is to enforce and interpret EU law and its Treaties. This takes precedence over UK law therefore British courts are required to strike down UK laws which contravene EU law. Many people and politicians in the UK perceive this to be a major threat to parliamentary sovereignty. For Britain and the rest of Europe the period immediately following the Second World War brought with it major social, political and economical changes. Whilst national economies struggled to recover, Europe had essentially been split in two, divided by social and political ideologies which spawned the cold war. However, the reaction of Britain at that time was very different from continental Europe. After having emerged from the war as one of the victors, the sovereignty of the state remained an object of national pride, whilst domestic issues such as pressure for development of the welfare state and the calls of the colonies for independence diverted attention from Europe. By 1961 however, the strong economic performance of the then six member states and the decline of Britain's foreign policy influence, prompted the UK government, under the Conservative Prime Minister Harold Macmillan, to apply for membership. ...read more.

For example William Hague campaigned on a 'save the pound' platform whilst his successor Iain Duncan Smith downplayed European policy altogether. The new Conservative leader however has suggested that the Tories will pursue a future policy of constructive engagement with the EU. On his first visit to Brussels as Tory leader in 2006, David Cameron praised the work of the Commission saying "the agenda of this commission does seem to be very positive". [politics.gaurdian.co.uk] In conclusion Britain's relationship with the EU has always been one characterised by semi-detachment and by internal political division within and between the political parties. The conservative party appears to epitomize this. It was the Tories who took Britain in to the EC, yet ever since they have been hampered by internal feuds. The Labour party on the other hand has portrayed a more united front on European issues, particularly in recent times, despite the threat of division in Harold Wilson's government in 1975. Interestingly the 2004 EP elections show that the Conservatives and Labour failed to gain 50 percent of the vote between them, and both lost seats. Whilst the UK Independence party made the biggest gains and voter turn out compared to the 1999 elections was up by around 15 percent, [www.parliament.uk] This suggests that public awareness and interest in European issues is on the increase meaning the main parties and in particular the Tories will have to adapt or be left behind. ...read more.