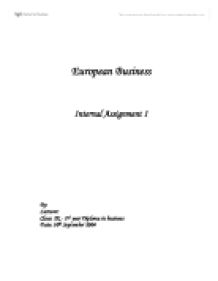 European Business Internal Assignment 1 By: Lecturer: Class: 2K - 2nd year Diploma in business Date: 30th September 2004 Discuss the impact of the Single European Act on European Business and European Economies in General The Single European Market has made great changes in the European business sector. The mutual recognition of standards has helped to remove barriers and maximize scale economies. Businesses can bid for public sector contracts outside their home state and operate freely within the European Union markets. The movement of capital has increased cross-border investments. Individuals can move freely with recognition of their professional and high education qualifications. Consumers enjoy better prices as a consequence of single market liberalization. The abolition of customs, fiscal formalities and technical barriers have created competition in community markets, this has encouraged economies growth, to investment and to employment creation. ...read more.

The advantages that such an investor aims at are: ? Closeness to the market - a thoroughly better joined market in order not to waste as much time and money. ? Better market information - by being closer to one another information is easier to obtain and thus action may be taken at a quicker pace ? Stimulating demand - when introducing a new competition to the market, one then has a raise in the level of the market demand. ? Raises image and local identity - one must be aware when competing in a foreign country, due to the local cultures, and the way local customers look at the firm. ? Access to public procurement - access for European Union members is accessible but non European Union members would have to have a local market presence to be eligible. ...read more.

? Due to joining costs in insurers and financiers have reduced, due to being one common market. ? Expanding the organisation is nowadays encouraged. Due to lower expenses and less documentation, and no barriers. Although we have seen many advantages / benefits, there are also many Threats and Challenges for the European businesses. These are: ? Competition increases, as big organisation may now sell their production your market. ? Due to more competition and an increase in products, prices may be reduced. ? Small organisations might close due to having larger competition thus they would not be able to cope with such low prices. In this way by joining the European members and allowing them to compete within, businesses may now consider the whole market with no barriers or not as many disadvantages to stop such an opportunity. ...read more.