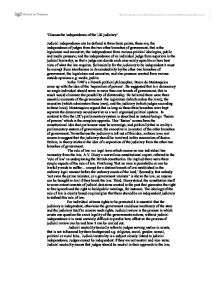 Discuss the indepedence of the UK Judiciary

'Discuss the independence of the UK judiciary' Judicial independence can be defined in three basic points, these are; the independence of judges from the two other branches of government, that is the legislature and executive; the independence from various political ideologies, public and media pressure; and the independence of an individual judge from superiors in the judicial hierarchy, so that a judge can decide each case solely upon his or hers best view of what the law requires. So basically for the judiciary to be independent it must be exempt from interference in its conductivity by the other two branches of government, the legislature and executive, and also pressure exerted from various outside opinions e.g. media, public. In the 1740's a French political philosopher, Baron de Montesquieu came up with the idea of the 'separation of powers'. He suggested that in a democracy no single individual should serve in more than one branch of government, this in result would eliminate the possibility of dictatorship. He believed there were three essential elements of the government: the legislature (which makes the laws); the executive (which administers these laws); and the judiciary (which judges according to these laws). Montesquieu argued that as long as these three branches were kept separate the democracy would survive as a well organised political system. ...read more.

In certain cases some law lords were quite active legislators. The constitutional reform act of 2005 invalidates this perfect illustration of a fusion of powers. Another case dismissing judicial independence is the existence of the Lord Chancellor. The head of the legal system and a judge (well he is in theory - despite the fact he very rarely judges) was before 2005, the Lord Chancellor. This title was appointed by the prime minister; the chancellor was a member of the government and sat regularly in the cabinet. In effect he was the leading parliamentary figure in the House of Lords, the second chamber of the legislature; he ran meetings there as the speaker does in the House of Commons. All of this was a good indication that the judiciary was indeed not independent. A subject often spoke about when talking about the independence of judges is how they are appointed. The system for appointing judges to the UK Supreme Court follows a two stage model known as 'nomination & confirmation'. Appointments to the judiciary are made by the monarch, which means that in effect, until the reforms of 2005, judges were part of the government patronage. The prime minister appointed to the court of appeal and to the judicial committee of the House of Lords (the law lords), having required advice on his appointments from the Lord Chancellor. ...read more.

As with lots of other issues in British politics, this along with them is probable to be the best defence concerning the freedom of the press. There are other various pressure groups specialising in this area too, such as: Liberty, Charter88 and Justice. After an overview of all of the points for and against judicial independence within the UK it is clear that there needs to be big change in order for it to actually exist. It is debated that the Civil Rights Act will enforce judicial independence although this is highly unlikely due to the executive and legislature's powers to remove and alter these laws at any time. It seems that the only real answer to adopting judicial independence in this country would be to have a codified constitution, this way the government could not interfere on such issues as judicial independence and then we could eventually have a judiciary system that is in fact independent. A duplication of the American system would also seem a likely possibility to ensuring judicial independence, but how far our parliament are willing to go to ensure this aspect of our government exists, isn't looking too good. Many are doubtful that our parliament will go as far as too adopt the American system as parliamentary sovereignty would then be abolished. However this and a codified constitution appear to be the only realistic options available for our judiciary to be independent. ...read more.