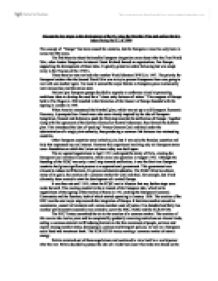 Discuss the key stages in the development of the EU since the Marshall Plan and outline the key issues facing the EU of 2000.

Discuss the key stages in the development of the EU since the Marshall Plan and outline the key issues facing the EU of 2000 The concept of "Europe" has been around for centuries, but the European Union has only been in action for fifty years. The first theories about the benefits European integration came about after the First World War, when Austro Hungarian Aristocrat Count Richard formed an organisation, Pan Europa, supporting the development of these ideas. It quickly gained an ardent following but was swept away in the Fascism of the 1930's. These theories were revived after another World disaster (WW2) in 1947. The priority for European leaders after the Second World War was to try to prevent Europeans from ever going to war with one another again. For most it seemed the major threats to European peace and security were nationalism and the nation state. National pro European groups decided to organise a conference aimed at promoting ambitious ideas to develop the need for a "closer unity between all states." The congress of Europe held in The Hague in 1948 resulted in the formation of the Council of Europe founded with the signing in London in 1949. When America announced the Marshall plan, which was set up to aid European Economic Recovery, it prompted two French men who were already inspired by the idea of European Integration, Monnet and Schman to push the first step towards the unification of Europe. ...read more.

However they were vetoed by De Gaulle on grounds that Britain's membership would give the USA too much influence in Europe, it was not until De Gaulle resigned in 1969 that these countries were allowed to enter and the six became the nine. A huge significance that Europe was moving towards becoming a unit. A second Enlargement took place in 1986 bringing the nine countries of the EEC to twelve. Pushing the borders of the EEC south and west, with the membership of Greece, Spain and Portugal. The EEC felt that by involving Spain and Portugal they would encourage democracy in the Iberian Peninsula and help link the two countries more closely to NATO AND Western Europe. This increased the influence of the EEC but complicated the communities' decision making process and altered the internal economic balance of the EEC. So they decided it was now time to deepen the relationship between the twelve rather than further enlargement of which there was to be none again until 1995. 1986 knew the EEC as the EC and its population accounted for over a fifth of World trade. It was in this year that the next major step was taken towards forming the European Union, as we know it today. The Single European act, signed in Luxembourg was widely acclaimed as "the most important step in the process of European Integration since the treaty of Rome. ...read more.

It is a new set of revisions to the founding of the treaties of the EU. The treaty fell short of completing its original goal of political union, promoted by the SEA and Maastricht, and the 15 leaders were unable to agree to changes on the structure of the EU institutions in preparation for further expansion in membership. However, they were able to agree on a single European currency in 1999, enlarging the EU to the East, policies on asylum immigration, unemployment and social policy. Amsterdam provided them with a chance to review the progress made since the Treaty of Paris. Whereby it was accepted that there may eventually be a multispeed approach to a monetary union, it has led to European leaders and citizens to think about the implications of a single currency. It seems that since the end of the Second World War, Europe has made many positive steps forward and is a huge and powerful trading block. The new ties of co-operation have been built, that have combined the interests of European States have helped give the region a new confidence. The effects of integration have been felt in a growing number of policy areas, including agriculture, competition, the environment, telecommunications, research and development, working conditions, culture and education and employment, yet Europe is not at a stage of total Unification, but was the original aim for Europe or will it continue to widen and deepen and remain a Europe of Nation states as De Gaulle desired. ...read more.