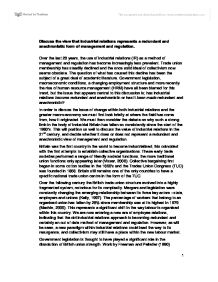 Discuss the view that industrial relations represents a redundant and anachronistic form of management and regulation.

Discuss the view that industrial relations represents a redundant and anachronistic form of management and regulation. Over the last 20 years, the use of industrial relations (IR) as a method of management and regulation has become increasingly less prevalent. Trade union membership has steadily declined and the once solid ideal of collectivism now seems obsolete. The question of what has caused this decline has been the subject of a great deal of academic literature. Government legislation, macroeconomic conditions, a changing employment structure and more recently the rise of human resource management (HRM) have all been blamed for this trend, but the issue that appears central to this discussion is; has industrial relations become redundant and anachronistic or has it been made redundant and anachronistic? In order to discuss the issue of change within both industrial relations and the greater macro-economy we must first look briefly at where the field has come from, how it originated. We must then consider the debate on why such a strong limb in the body of industrial Britain has fallen so consistently since the start of the 1980's. This will position us well to discuss the value of industrial relations in the 21st century, and decide whether it does or does not represent a redundant and anachronistic view of management and regulation. Britain was the first country in the world to become industrialised; this coincided with the first attempts to establish collective organisations. These early trade societies performed a range of friendly societal functions, the more traditional union functions only appearing later (Visser, 2000). Collective bargaining first began in some cotton textiles in the 1860's and the Trades Union Congress (TUC) was founded in 1868. ...read more.

In fact, these are many of the trends that have been seen in UK employment structure; trends towards smaller workplaces, the service sector, part-time jobs, non-manual occupations etc. However, Booth (1989) states that even though membership density fell by 11% between 1980 and 1986 only 4.4% of this change is attributable to changes in the composition of industry alone. Mere shifts within the mix of industry cannot be the whole story (Metcalf, 1991). Nevertheless, some blame for the demise of IR can be attributed to this change within the employment market, further showing that the inability of IR to continually reposition itself within the bigger economic picture has contributed to its increasingly anachronistic image. Approaches to deciding exactly what has happened to IR are varied across the academic spectrum. An eclectic approach as shown by Metcalf (1991) suggests that all three explanations (legislation, macro-economy and employment trends) are contributory factors on the grounds of plausibility. However, the tendency of analysts to try and explain union decline within the confines of one of these factors is an under estimation of its complexity. More recent thought indicates that a complex compositional effect of all three factors is the most fitting explanation (Green, 1992). If new state controls, shifts within the macro-economy and employment trends have changed the current economic climate, leaving the role of industrial relations in doubt then perhaps industrial relations could readjust its focus to align more with the contemporary face of organisation. This is the subject of new industrial relations. Stephen Dunn makes it clear how the old industrial relations approach appears to be dated by using metaphorical approach, comparing the traditional endless struggle between trade union and employer to that of a 'trench war' (Dunn, 1990). ...read more.

In conclusion, we see that the field of industrial relations is an extremely complex area of debate, the intricacies of which go far beyond the scope of this essay. As has been seen, three major factors have contributed to the undeniable decline of industrial relations - legislation, employment structure and macroeconomic change. We have also seen that, though diminished, trade unionism is not yet entirely redundant. Other European countries with equally developed employment structures have successfully maintained strong levels of unionisation, and even within the UK some areas of union growth have been identified. Nevertheless, in the face of such intentionally restrictive legislation union membership has been forced in to the background, unable to reposition itself in the changing global market. This has allowed the discipline HRM to take over many of its functions in the contemporary organisation. Employment structure in the UK has changed a great deal since trade unionism was at its strongest in the late 1970s. Industrial relations in its traditional form does now represent an anachronistic form of management although I do believe there is still a role for collectivism within future organisational paradigms. If HRM is to prove the true successor to IR within the modern workplace then some of its principles will have to be developed further. Finally, in considering the central issue, 'has industrial relations become redundant and anachronistic or has it been made redundant and anachronistic?' It has become clear that the demise of IR has been a combination of push and pull factors, for example legislative controls seeking to pull union membership down and new management-orientated methods seeking to push it out. Industrial relations has served its purpose well for over a hundred years, and although it may now seem that it has been made redundant, I believe it is now best that we consider it time for industrial relations to take its well-earned retirement. ...read more.