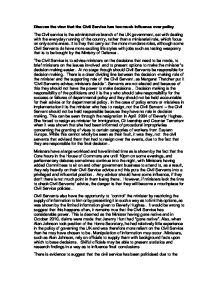 Discuss the view that the Civil Service has too much influence over policy The Civil service is the administrative branch of the UK government, set with dealing with the everyday running of the country, rather than a ministerial role, which focus on only some areas. It is they that carry out the more mundane roles, although some Civil Servants do have more exciting life styles with jobs such as testing weaponry that is to be bought by the Ministry of Defence. The Civil Service is to advise ministers on the decisions that need to be made, to brief ministers on the issues involved and to present options to make the minister's decision making easier. At no stage though should Civil Servants be responsible for decision making. There is a clear dividing line between the decision-making role of the minister and the supporting role of the Civil Servant. as Margaret Thatcher put it 'Civil Servants advise; ministers decide'. Servants are not elected and because of this they should not have the power to make decisions. ...read more.

However, if ministers lack the time to check Civil Servants' advice, the danger is that they will become a mouthpiece for Civil Service policies. Civil Servants also have the opportunity to 'control' the minister by restricting the supply of information to him or by presenting it in such a way as to limit his options, as was shown by the limited information given to Beverly Hughes. It would be wrong to suggest that this happens often, it remains true that the Civil Service has considerable power. This is deemed as the Minister having gone native and in October 2010, claims were made that Jeremy Hunt had "gone native". Also, when Alan Johnson took position of the Home Secretary, he had relatively little experience in the policy of governing the UK and was therefore more reliant on the Civil Service than he may have chosen to be. Manipulation of information may occur. Ministers, such as Alan Johnson, rely on officials to supply them with background facts upon which to base decisions. ...read more.

If the senior Treasury officials can persuade each new Chancellor of the Exchequer of the virtues of keeping spending low, their influence automatically grows. An example of this was in 1999, when Chancellor Gordon Brown was resisting calls for extensive increases in spending on health and education, some critics suggested he had 'gone native', suggesting that Brown had been influenced by the Civil Servants, adopting their norm of behaviour and so losing his enthusiasm for spending. Overall, the Civil Service do have more power over policy than their supposed political neutrality should let them, but it is to be expected in the modern world of political advisors, and the competitive world which seeks public recognition. While the senior civil servants, due to the permanence and long serving nature do have a great deal of power, the average civil servant has less power, and is more reliant upon presentation of the facts in a favourable way then anything else, something which is true with Ministers and Government as a whole ...read more.