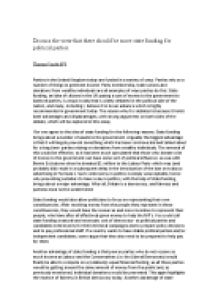 Discuss the view that there should be more state funding for political parties.

ï»¿Discuss the view that there should be more state funding for political parties. Thomas Smith 6F3 Parties in the United Kingdom today are funded in a variety of ways. Parties rely on a number of things to generate income. Party membership, trade unions and donations from wealthy individuals are all examples of ways parties do this. State funding, an idea of citizens in the UK paying a sum of money to the government to bankroll parties, is a topic today that is widely debated in the political side of the nation, and many, including I, believe it to be an advance which is highly recommended in government today. The reason why it is debated is because it holds both advantages and disadvantages, with strong arguments on both sides of the debate, which will be explored in this essay. I for one agree to the idea of state funding for the following reasons. State funding brings about a number of assets to the government. Arguably the biggest advantage is that it will largely prevent something which has been controversial and talked about for a long time- parties relying on donations from wealthy individuals. The removal of this would be effective, as it has been much speculated that those who donate a lot of money to the government can have some sort of political influence- as was with Bernie Ecclestone when he donated £1 million to the Labour Party which may (and probably did) ...read more.

On final point is that if parties and candidates are financed with only private funds from wealthy individuals, economical inequalities in the society might turn into political inequalities in government. In many countries, the support base of political parties and candidates are divided along socioeconomic lines. For example in the United Kingdom, the support base of labour and left-wing parties for example, tend to be traditionally less wealthy than the support base of other parties- i.e. the Tories(not always though). If political parties receive all their income from private donations, there is a risk that socioeconomic differences in the society will translate into differences in representation and access to political power. On the other hand, one could say that parties being state funded is not at all a worthwhile idea, for the following reasons. Firstly, taxpayers should not have to provide their hard-earned money to supply parties? needs that they may not even support. The average civilian in the UK gives a generous amount of money to the government through taxation anyway, and so compulsory state funding would be simply unfair and largely unnecessary. And if they don?t support the parties, then they have no need or right to contribute money to help these parties. One could hardly see many members of ethnic minorities happy about funding the campaign of the British National Party for instance! Also, making state funding the main source of funding would largely eliminate interest groups (i.e. ...read more.

However this argument can be challenged by the fact that without state funding, corruption (as seen with Ecclestonegate) will remain a key issue and that the parties are working to the benefit of their rich business backers and not representing the will of the people, and that with state funding they will work to represent the people as they are the providers of the money, and so will focus solely on them, as it should be in a democracy. However once again even this counter-argument can be countered, because if state funding were to be introduced, then the parties would not have to work as hard to gain money from their party members, which could in turn result in MP?s not fully representing the people who voted them in, possibly causing the public to feel detached from the political process, which is totally not what the government want to happen. Although state funding has some clear advantages and disadvantages to the way the country is run, it is my opinion that the benefits of state funding outweigh the disadvantages- the elimination of corruption in a democracy is simply essential as is economic equality and fairness and representation within parties in the United Kingdom, so that smaller parties -which are a vital part of a democracy as they ensure that a complete spectrum of opinions is represented- are represented, so that just like in a proper democracy all voices can be heard. It is for these, and other, strong reasons that I agree to the idea of implementing the system of state funding in the United Kingdom today. ...read more.