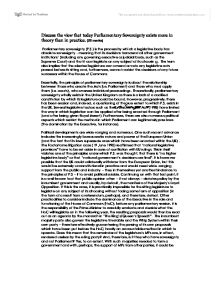 Discuss the view that today Parliamentary Sovereignty exists more in theory than in practice.

Discuss the view that today Parliamentary Sovereignty exists more in theory than in practice. (25 marks) No regime de soberania parlamentar, um �rg�o legislativo tem soberania absoluta, o que significa que est� acima de todas as outras institui�es governamentais (incluindo quaisquer �rg�os executivos ou judiciais que possam existir).PariP Parliamentary sovereignty (P.S.) is the process by which a legislative body has absolute sovereignty - meaning that its decisions transcend all other government institutions' (including any governing executive or judicial body, such as the Supreme Court) and that it can legislate on any subject of its choosing. O termo tamb�m pressup�e que o �rg�o legislativo pode alterar ou vetar quaisquer atos legislativos anteriores. The term also implies that the elected legislature can amend or veto any legislative acts passed before its sitting and, furthermore, cannot restrict the decisions of any future successor within the House of Commons. Essentially, the principle of parliamentary sovereignty is about the relationship between those who create the Acts (i.e. Parliament) and those who must apply them (i.e. courts), who oversee individual proceedings. ...read more.

and would need wide-ranging support from the public and industry - they in themselves yet another hindrance to the principles of P.S - if to avoid political suicide. Continuing on with that last point, it is a well-known fact that public opinion often - if not always - dictates policy by the incumbent government and usually, by default, the manifesto of Her Majesty's Loyal Opposition. If this is the case, it is practically impossible for the sitting legislature to legislate on any subject of its choosing without facing some form of opposition (in the form of a result from a referendum, perhaps), and therefore, defeat. Other practicalities to consider include the dominance of the Executive in the role and functioning of the House of Commons (HoC); before any parliamentary session, it is the responsibility of the Prime Minister to carefully evaluate and decide what the HoC will legislate on in the following year, the resulting proposals would then be read out as an agenda by the monarch in "The King's/Queen's Speech". The incumbent majority party also govern the legislative timetable and the Whip System within their own party - therefore effectively guaranteeing the passing of its own proposals which have been put before the HoC; hardly an accountable method in which to operate. ...read more.

It is therefore my conclusion that I am in agreement with the statement that "Parliamentary sovereignty exists more today in theory than in practice". There are too many limiting factors against the view which is supporting that Parliament is wholly autonomous and sovereign of any higher authority; the EU being a glaringly obvious example of a supranational state which has become deeply federalised and, in more cases than not, ruled against the UK's own decisions in individual circumstances. Another instance which has highlighted the flaws of the conventionalisation of the legislature is the Human Rights Act (1998). Sadly, it binds the future actions of any successor government to itself. It should be held that any future parliament can be permitted (and hold the supreme right) to debate and execute the re-introduction of corporal punishment, for instance, but the HRA effectively prohibits that, as the EU's implementation of the HRA also will supersede any vacancy left by the repealing of the Act; a damning indictment against the position upon which the UK has suddenly found itself. ...read more.