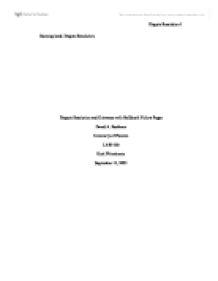 Running head: Dispute Resolution Dispute Resolution and Grievance with BellSouth Yellow Pages David A. Beckham University of Phoenix LAW 529 Rich D'Ambrosio September 11, 2005 Dispute Resolution and Grievance with BellSouth Yellow Pages BellSouth Advertising and Publishing Corporation is a publishing company that sells and produces the print and online yellow pages in the Southeast United States. We have a union environment guided by a contract with the Communication Workers of America, CWA. Our primary process for dispute resolution is the grievance procedure. Union employees will use the grievance process for any type of issue ranging from contract violations, account possessions, disputes and issues concerning discipline or termination. Over the past seven years, I have been involved with many grievances. The grievance process has four levels to resolution. The first level is with the grievant and the supervisor. The second level is heard by the regional or director level. The third level is held between labor relations and the company union representative. ...read more.

The file that I had was three inches thick full of documentation on performance, his several counseling statements on misconduct and all of his steps of discipline. Our discipline process has four steps. The first step is counseling, the second a warning, the third is suspension and the final is termination. This rep had had four counseling statements, three warnings, two suspensions and two terminations. This was the reps first termination was for performance. The grievance process started with the first level which I held. Upon hearing the information presented, I upheld the termination of the employee. The documentation that we had was sufficient in our opinion to uphold the termination. The grievance moved to the second level with our regional sales manager. The union decided to turn this into a discrimination case. They protested that this employee was discriminated against because of his disability with diabetes. The union made the argument that we were trying to get rid of this employee because of his diabetes. ...read more.

The union was well aware of the desire to terminate this sales rep. During the third level of the dispute process, the union offered to withdraw their grievance and settle based on two requests. The first request was that the terminated sales rep be paid three months salary in addition to keeping his retirement benefits. This was to allow the rep to continue his insurance until he could get another job or secure additional insurance. The second part of the request was that we dismiss two other grievances we currently had on another rep who happened to be the BAPCO union rep in our office. The dispute resolution process that we use works, but is very complex. It is very important that managers document everything. The smallest things can get a grievance turned and the discipline pulled. The union will use whatever means possible to win a case. The process does settle disputes, but it is a continual game of give and take. As a manager, I have to be willing to give in on some grievances in order to win the ones that are most important. ?? ?? ?? ?? Dispute Resolution 1 ...read more.