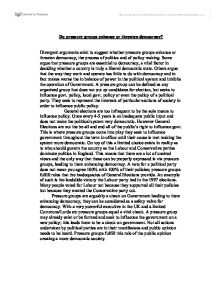 Do pressure groups enhance or threaten democracy? Divergent arguments exist to suggest whether pressure groups enhance or threaten democracy, the process of politics and of policy making. Some argue that pressure groups are essential to democracy, a vital factor in deciding whether a country is truly a liberal democratic state. Others argue that the way they work and operate has little to do with democracy and in fact makes worse the in balance of power in the political system and inhibits the operation of Government. A pressure group can be defined as any organized group that does not put up candidates for election, but seeks to influence govt. policy, local govt. policy or even the policy of a political party. They seek to represent the interests of particular sections of society in order to influence public policy. General elections are too infrequent to be the sole means to influence policy. ...read more.

Many people voted for Labour not because they supported all their policies but because they wanted the Conservative party out. Pressure groups are arguably a check on Government leading to them enhancing democracy, they can be considered as a safety valve for democracy. With a very powerful executive in the UK and a limited Commons/Lords etc pressure groups equal a vital check. A pressure group may already exist or be formed and seek to influence the government on a new policy; this leads them to be a check on government. Not all actions undertaken by political parties are in their manifestoes and public opinion needs to be heard. Pressure groups fulfill this role of the public opinion creating a more democratic society. On the other hand pressure groups can be seen as to threaten democracy, as pressure groups often operate in a very undemocratic and unrepresentative way in how they work internally. ...read more.

This does not lead there to be much democracy overall. Government would argue the case that they should spend their time governing, they place their policies to the electorate (pressure groups do not). They have the legitimate right to decide policy gained this right is gained via the ballot box. Pressure groups provide an unnecessary input that is undemocratic. Time that could be spent on creating and updating policies is spent dealing with pressure groups which leads them to threaten democracy. Due to 75%+ of the population voting in general elections; it still is the primary form of political participation. Pressure groups membership is a minority of the population and deciding/influencing policy thus is not right in the eyes of the government. Overall I believe that pressure groups play an essential role in enhancing democracy if it were not for them checks and balances would not properly be carried out. On top of this the point for pressure groups enhancing democracy greatly out weigh the points saying it threatens democracy. ...read more.

Overall this essay has covered some of the main arguments for and against the influence of pressure groups on democracy in the UK. However, there is not enough evaluation or use of examples to gain high marks. The theories of pluralism and elitism are an important part of the pressure group and democracy question so they should be included.