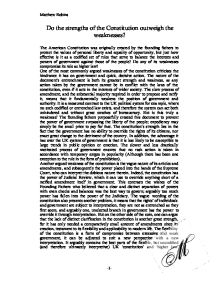 Do the strengths of the Constitution outweigh the weaknesses?

Do the strengths of the Constitution outweigh the weaknesses? The American Constitution was originally created by the founding fathers to protect the values of personal liberty and equality of opportunity, but just how effective is it as a codified set of rules that serve to balance the interests and powers of government against those of the people? Do any of its weaknesses compromise its role as higher law? One of the most commonly argued weaknesses of the constitution criticises the hindrance it has on government and quick, decisive action. The nature of the document's entrenchment is both its greatest strength and weakness, as any action taken by the government cannot be in conflict with the laws of the constitution, even if it acts in the interests of wider society. The slow process of amendment, and the substantial majority required in order to propose and ratify it, means that it fundamentally weakens the position of government and authority. It is a measured contrast to the UK political system for example, where no such codified or entrenched law exists, and therefore the system can act both unhindered and without great swathes of bureaucracy. But is this truly a weakness? The founding fathers purposefully created this document to prevent the power of government surpassing the liberty of the people; expediency may simply be the small price to pay for that. ...read more.

The problem with the second amendment is that it is a relic of an era where the 'right to bear arms' was an arguable necessity to protect ones property and from tyranny. In modern America, even if a state is largely against gun ownership, it is still enforced upon them. It is arguably something that should be rescinded to state level, because the need for such an amendment has long passed. Unfortunately, this exposes another fundamental flaw in the constitution, that the long process allows a minority of states to override the want of a majority of states, who, unless 75% of them reach a consensus, will not be able to restrict the imposition of such an archaic amendment. Another, very frequently expressed argument against the current constitution, is that it doesn't promote 'true' liberty. America likes to think of itself as a meritocracy, where all individuals have equal rights and privileges. This however, has very specific contextual elements, traced back through history; we find for example that black slaves were only counted as 3/5ths of a citizen in congress, this continued into segregation, Japanese interment camps (which further highlights the 'flexibility' of the constitution for 'US citizens') etc. Clearly, there is an element of discrimination in the Constitution, an unwritten clause that allows it to apply only to certain individuals; 'these rules only apply to you if you fall into category X, Y and, Z'. ...read more.

congress the ability to go to war, but decided because it met too infrequently, that the president should have the power to declare war instead. This, in part, has lead to congress acting as a supervisory entity to the president; the opposite of what was intended. This is an example of how the constitution has not prevented the concentration of power. The role that the electoral colleges play is also regarded as a somewhat dangerous (As evidenced by the election of George Bush) gap in the constitution's aims to protect democracy and 'the free and natural path to lead'. But, many argue; checks and balances still exist, and the other two branches of government; Congress and the Supreme court, have the ability to remove a president, regardless of how much power he has accumulated, via the process of impeachment granted in the constitution. This, they argue, is a positive thing, a president with a great deal of power that is still held in check, is more effective than a powerful but slow congress, as the president can act quickly, and then be 'yanked back on the leash' if things go overboard. In conclusion, it really comes down to how one views government, as a pragmatist or as an idealist. If one is pragmatic about the relationship government has with its people, then the difficulty involved in changing the constitution and the safeguards it has for its citizens are more desirable. Matthew Robins -1- ...read more.