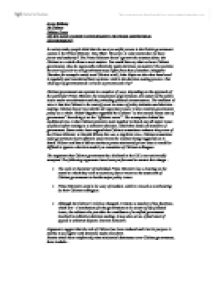 Do We Have a Cabinet Government or Prime Ministerial Government?

DO WE HAVE CABINET GOVERNMENT OR PRIME MINISTERIAL GOVERNMENT? In society today people think that the most powerful person in the British government system is the Prime Minister, Tony Blair. However, to what extent does he have power and authority? The Prime Minister doesn't govern the country alone; the Cabinet as a whole discuss most matters. You could then say that we have Cabinet government- they do supposedly collectively make decisions on matters! The position however of power in one government may differ from that of another, Margaret Thatcher for example rarely used Cabinet at all, John Major on the other hand used it regularly and considered there opinions vital in the decision making process. But what type of government do we have at present and why? Cabinet government can operate in a number of ways, depending on the approach of the particular Prime Minister, the complexion of government, the nature of the policy issues under consideration and the prevailing political circumstances. ...read more.

The argument that Cabinet government has declined in the UK is not universally accepted. The following arguments have been put forward to contest this charge... * The style or character of individual Prime Ministers has a bearing on the extent to which they wish to exercise plan or resort to the teamwork of Cabinet government to decide major policy issues. * Prime Ministers need to be wary of conduct, which is viewed as overbearing by their Cabinet colleagues. * Although the Cabinet's role has changed, it retains a number of key functions, which are - A mechanism for the government to be aware of key political issues, the cabinet also provides the semblance of a unified government involved in collective decision making, it may also act as a final court of appeal to arbitrate deputes between ministers. ...read more.

The Prime Minister has a direct relationship with all ministers and expects to be informed about all new policy initiatives, which makes it possible to get rid of those he/she dislikes. A Prime Minister can intervene selectively over the entire field of policymaking; the cabinet can deal with the material, which is put before it. The Prime Minister presides over the Cabinet and is responsible for the allocation of functions among ministers and informs the Queen at regular meetings of the general business. The Prime Minister's other responsibilities include recommending a number of appointments to the Queen. Recent developments suggest that the British Prime Minister is becoming 'presidential'. During the 1980's, this development was associated with Margaret Thatcher. It was not then thought of until present day as Tony Blair also fits into the category. Tony Blair doesn't use his Cabinet often enough. He is in complete control of the present British government. He has such a majority within the House of Commons that he can really do as he pleases. ...read more.

3 Stars - This essay is clearly written, and for the most part well structured - the introduction is strong, and the line of argument is largely thorough and logical. There is evidence of strong subject knowledge and understanding, and of wider reading.
Where the essay could be improved is that the argument is not sustained towards a strong, analytical conclusion that directly answers the question. The overall focus of the answer was quite narrow, in that it concentrated on Blair - the argument as a whole would have been stronger if Blair had been compared more with other prime ministers and that there was a greater sense about the development of cabinet government. From an essay technique perspective there were a number of occasions where vague generalisations were made when specific examples would have been more appropriate.