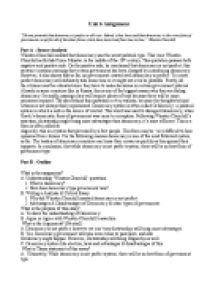 Do you agree with Churchill's statement that &quot;democracy is the worst form of government except for all of the other forms which have been tried from time to time&quot;.

﻿Unit 6 Assignment ?No one pretends that democracy is perfect or all-wise. Indeed, it has been said that democracy is the worst form of government except for all of the other forms which have been tried from time to time.? Winston Churchill Part A : Source Analysis Winston Churchill insisted that democracy was the worst political type. This view Winston Churchill as British Prime Minister in the middle of the 20th century. This quotation possess both negative and positive side. On the positive side, he mentioned that democracy is not perfect; this sentence contains meaning that certain government has been changed by introducing democracy. However, it also shows that so far, no government created with democracy is perfect. To create perfect democracy will definitely take some time or it might not even be possible. Firstly, all the citizens must be educated since they have to make decisions on certain government policies. Already in some countries like in Russia, this is one of the biggest reason why they are failing democracy. Secondly, passing a law will require plenty of time because there will be more processes required. The idea behind this quotation is very realistic, because the thoughts behind citizens is not always fairly represented. ...read more.

The governing system, its institutions, actions, and legal structures, are designed with the individuals. The perspective presented in the source is that Winston Churchill is insisting that democracy was the worst political type, this views him as British Prime Minister during the middle 20th century. This quotation possess both positive and negative perspectives. So far, no government created with democracy is perfect; nonetheless, democratic system brings advantages to our community. On one side of the issue, the perspective represented by Winston Churchill can be argued with or consent with. In order to create efficient democracy will definitely take time, because citizens take parts in governing system. However, this might be the reason why certain governments failed running democracy government. The idea behind this quotation is very realistic, since the thoughts behind the citizens is not always fairly represented. This source is again demonstrating how democracy works in the government and why this system is not perfect. Ultimately, While democracy is not perfect system, there will be no other best form of government type. First of all, In democracies, the people is expressed in the selection of representatives of the government during elections. Also, private market system, independent judiciary, media and rule of law; theses act as tools to entrench basic citizen rights and freedoms. ...read more.

Advantages and disadvantages follow after these two systems. Democratic system will relying on citizens, individuals get right to vote, involvements in passing the laws and private market system. Although, democratic system brings individuals rights, the thoughts behind citizens is not always fairly represented. Dictatorship does not care about citizens voice, its only the government who?s important. Even though, citizens does not get their rights as much as democratic system citizens; dictatorship might be more efficient. Since, it takes less time to pass the laws. Also, the leaders of democracy countries can loose their crown as quickly as they gained their supports; where dictatorship system does not allow citizens to vote. Therefore, individuals cannot definitely declare that certain system is better than the other. The ideological perspective in the source, that voting is the most obvious evidence of democracy, where it shows individual rights. However, it alone does not define democracy, the citizens must be educated and well informed about the democracy, since they are heart of the country. Democracy is on the edge of a cliff, since it takes in citizens voice and government voice. It might falling into the hands of people who will use the powers of government for their own purposes. Following these reasons, Winston Churchill can state the democracy is not perfect. However, any other form of government system is not perfect as well. ...read more.