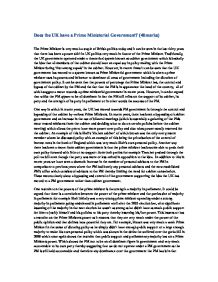 Does the UK have a Prime Ministerial government?

Does the UK have a Prime Ministerial Government? (40marks) The Prime Minister is very much a staple of British politics today and it can be seen in the last thirty years that there has been a power shift in UK politics very much in favour of the Prime Minister. Traditionally, the UK government operated under a theoretical system known as cabinet government which is basically the idea that all members of the cabinet should have an equal say in policy making with the Prime Minister being 'first among equals' in the cabinet. However, in recent times it can be seen that the UK government has moved to a system known as Prime Ministerial government which is when a prime minister uses its powers and influence to dominate all areas of government including the dictation of government policy. It can be seen that the powers of patronage the Prime Minister has, the control and bypass of the cabinet by the PM and the fact that the PM is in appearance the head of the country, all of which suggest a move towards a prime ministerial government in recent years. However, it can be argued that whilst the PM appears to be all dominant in fact the PM still relies on the support of its cabinet, its party and the strength of its party in parliament or in other words the success of the PM. ...read more.

Another way in which it could be seen that we operate under a PM government is appearance of the prime minister as a supposed head of the country. In recent years there has been an increased media focus on the PM (even leading to puppet parodies which can be seen to represent the national mood at the time) making them the focal point or at least seem to be of British politics, the increased media focus has also led to many voters voting for the prime minister candidate rather than the party they represent which also leads to more power as it shows the PM to be instantly recognisable and important so it commands respect. An example of the Media focus on the prime minister which made him more powerful as they would be seen as the figure head of the government is Blair coming out of the G8 meeting to address the nation and to drive to downing street to sort it out after 7/7 which made him more powerful as he was seen to care and be able to take action. Another way the PM appears to be the head of the country is in foreign policy, Prime ministers can be seen to be the head of foreign policy in terms of conflicts diplomacy and such for example, Blair is often seen as the man who made the decision to invade Iraq and Afghanistan which gives him the appearance of being ...read more.

The PM chooses all of the ministers and junior ministers and all who sit in cabinet so whether the MPs progress in their political career relies on the favour to the PM thereby ensuring support of the PM from the lower down MPs and if they do not support the PM they are forced to resign for example MP John Hutton was forced to resign after saying Labour under Brown would be a '****ing disaster*' which shows that whilst people may argue that PMs need support from its ministers it can be seen equally or more so that ministers need the support of a PM which shows a move to PM government as it show the PM making the decisions and also controlling its party. In conclusion, it seems that there has indeed been a move towards PM government in recent years especially considering both Thatcher and Blairs premierships and whilst it may be said that the style of government depends on the personality of the Prime Minister traits of a PM government still remained in the premierships of the likes of Brown and Major so overall its clear to certain extent that there has been a move to a Prime Ministerial government. However it does seem that this is facilitated by the party and the cabinet so one may argue that whilst indeed it is a Prime Ministerial government it is supported and facilitated by the government it is perceived to dominate. ...read more.