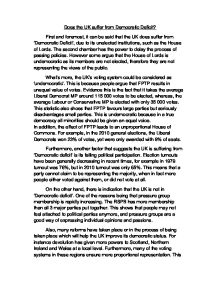 Does the UK suffer from Democratic Deficit?

Does the UK suffer from Democratic Deficit? First and foremost, it can be said that the UK does suffer from 'Democratic Deficit', due to its unelected institutions, such as the House of Lords. The second chamber has the power to delay the process of passing policies. However some argue that the House of Lords is undemocratic as its members are not elected, therefore they are not representing the views of the public. What's more, the UK's voting system could be considered as 'undemocratic'. This is because people argue that FPTP results in unequal value of votes. Evidence this is the fact that it takes the average Liberal Democrat MP around 115 000 votes to be elected, whereas, the average Labour or Conservative MP is elected with only 35 000 votes. ...read more.

Furthermore, another factor that suggests the UK is suffering from 'Democratic deficit' is its falling political participation. Election turnouts have been generally decreasing in recent times, for example in 1979 turnout was 76%, but in 2010 turnout was only 65%. This means that a party cannot claim to be representing the majority, when in fact more people either voted against them, or did not vote at all. On the other hand, there is indication that the UK is not in 'Democratic deficit'. One of the reasons being that pressure group membership is rapidly increasing. The RSPB has more membership than all 3 major parties put together. ...read more.

This can be seen, in the Northern Ireland were STV is used and the number of votes is highly proportional to the number of seats won, e.g. DUP won 31% of votes and 33% of seats and Sein Feinn won 26% of votes and 26% of seats. Also, there are plans to reform the House of Lords to make it more democratic. In the future there is the possibility that members of the House of Lords will be elected therefore they will be representing the public. In conclusion, it is clear that the UK does suffer from certain aspects of democratic deficit such as unelected institutions, unfair voting system and a declining election turnout. But it shouldn't be forgotten that the UK has also other redeeming democratic features for instance increasing pressure group membership and devolution. ...read more.

3 stars - The strengths of this essay are that it directly addresses the question, considers both sides of the argument and summarises them with a decent degree of accuracy.
Where the essay could be improved is with a greater depth of explanation - the author does not demonstrate strong subject knowledge because the points made are too brief and generalised. A greater explanation of the key terms and concepts would be helpful, and a more varied range of supporting examples.