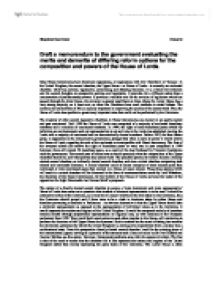 Bhupinder Kaur Kaler Group M Draft a memorandum to the government evaluating the merits and demerits of differing reform options for the composition and powers of the House of Lords. Most liberal democracies have bicameral legislatures, or legislatures with two 'chambers' or 'houses'. In the United Kingdom, the second chamber, the Upper House - or House of Lords - is currently an unelected chamber, which has judicial, leglislative, scrutinising and debating functions. It is a forum for reflection and for second thoughts on prospective policies and legislation. It provides for a diffusion rather than a concentration of parliamentary powers. It provides a valuable role for the revision of legislation which has passed through the lower house, this revision is greatly significant at times where the Lower House has a very strong majority, as it does now, or when the Commons have used methods to curtail debate. The scrutiny and amendment of Bills is equally important in improving the quality of the statute book. Thus the House of Lords does perform a great many important roles that could not be performed by the Commons. The majority of other second legislative chambers in liberal democracies are elected or are partly elected and part nominated. ...read more.

Elections to it would constitute a kind of mid-term opinion poll on the performance of the government, and voters would inherently register their dissatisfaction with the government of the day through their votes and this could leave the House of Lords as dominated by peers of one particular party affiliation. It could also be seen as more legitimate than the Commons. Proportional representation would also give the second chamber more legitimacy to the Commons which, is not the desired effect of any reform as its role is very different to that of the Commons. An indirectly elected second chamber would be composed of delegates from the devolved executives in Scotland, Wales, and Northern Ireland, and from local authorities in England. The English representatives would be delegates from the London authority and the regional chambers; themselves elected in large part from local authorities. This type of composition, as pointed out by Vernon Bogdanor in his article "Reform of the House of Lords: A Sceptical View ", is in fact modelled on the German Bundesrat which gives' the devolved governments formal access to the legislative powers in a reformed second chamber'. The House would hold the same powers as they do at present. ...read more.

Also the expertise offered by these unelected peers ensure worthy scrutiny of the proposals that come from the Commons, as they not only offer independence from bias views but also expertise. The Right Honourable Ian Duncan Smith's proposal indicates a House of 80% elected and only 20% appointed, this would pose as more democratic and representative of the people, however is it desirable that the majority who are elected would have a greater degree of legitimacy when casting their votes? Another pitfall is that the House would be almost equal in say to the House of Commons as it would also be representative of the nation to a large extent. In conclusion it would seem that Lord Wakehams proposals do seem the best option for reform as the Royal Commission has taken into account the fact that the two Houses must not have equal say in a matter, the Commons should prevail, always. This ensures that we would not be in the constitutional crisis of deadlock in Parliament, on disagreement of an issue. The crisis of the present unrepresentative nature of the House of Lords would also be addressed. I believe along with many others that such a reform is the first step to allowing more women and other minority groups into positions of authority, setting an effective and potent example of equality for the rest of the nation to follow. ...read more.