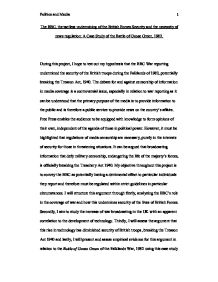 During this project, I hope to test out my hypothesis that the BBC War reporting undermined the security of the British troops during the Falklands of 1982, potentially breaking the Treason Act, 1940.

The BBC, the tactless undermining of the British Forces Security and the necessity of news regulation: A Case Study of the Battle of Goose Green, 1982. During this project, I hope to test out my hypothesis that the BBC War reporting undermined the security of the British troops during the Falklands of 1982, potentially breaking the Treason Act, 1940. The debate for and against censorship of information in media coverage is a controversial issue, especially in relation to war reporting as it can be understood that the primary purpose of the media is to provide information to the public and is therefore a public service to provide news on the country's affairs. Free Press enables the audience to be equipped with knowledge to form opinions of their own, independent of the agenda of those in political power. However, it must be highlighted that regulations of media censorship are necessary, purely in the interests of security for those in threatening situations. It can be argued that broadcasting information that defy military censorship, endangering the life of the majesty's forces, is officially breaking the Treachery Act 1940. My objective throughout this project is to convey the BBC as potentially having a detrimental effect to particular individuals they report and therefore must be regulated within strict guidelines in particular circumstances. I will structure this argument through firstly, analyzing the BBC's role in the coverage of war and how this undermines security of the lives of British Forces. ...read more.

The latter enabled journalist content to be easily broadcast from other jurisdictions beyond the control of individual governments and therefore changed both politically and socially too - media was not just a tool for those in power anymore. Also, due to the speed of satellite and the distance with which it could cover, war coverage was a lot more efficient which though allowed the audience to keep up to date with their countries current affairs, could prove detrimental to the people on the front line, as mentioned before with 2 Para in the battle for Goose Green. Following concerns that the security of British Forces is undermined as a result of media coverage, it can be argued that the Treachery Act of 1940, though since abolished, has constantly been broken by media conglomerates. It states in the first statute; If with any intent to help the enemy, any person dies, or attempts or conspires with any other person to do any act which is designed or likely to give assistance to the naval, military or air operations of the enemy, to impede such operations of His Majesty's forces, or to endanger his life, he shall be guilty of felony and shall on conviction suffer death. (Seaborne Davis, D, 1941) Reaching the conclusion that the media impede such operations of His Majesty's forces every time they issue information to the public (such as military tactics, intelligence and future operations) ...read more.

In conclusion, it is evident that the media can prove a negative force in their coverage. Though the BBC claimed that they were a news source independent of politics, they still seek to reap economic rewards. Unfortunately with the changes to modernity in society, this has been made easier with the development of technology, of satellite and cyberspace. During the Falklands war, satellite played a role in a lack of government control, which suggests that regulations should be enforced. However, with the modernity there has been a change in the belief system too. The people have richer opportunities to speak out and be heard, demonstrated through internet blogs and forums, and censorship would therefore prove difficult to accept. In a viscous circle, the government is torn between the need to protect its nation, inclusive of their servicemen and women, and maintaining the support of the people in order to remain in power. Though once people are outlined the reasons, this should be understood and more cases of censorship like Prince Harry's recent deployment, should be carried out. In questions, Thatcher summed up this debate perfectly; "We enjoy freedom of speech in a democracy...(however) ...members are very much aware that too much discussion about the timing and details of operations can only help the enemy, and hinder and make things more difficult for our forces. In wartime there used to be a phrase 'careless talk costs lives'. It still holds." (The lessons: Report 28, 27 May 1982, p.326). ?? ?? ?? ?? 1 Politics and Media ...read more.