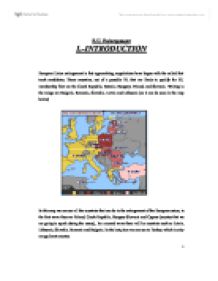 E.U. Enlargement 1.-INTRODUCTION European Union enlargement is fast approaching; negotiations have begun with the called fast-track candidates. Those countries, out of a possible 10, that are likely to qualify for EU membership first are the Czech Republic; Estonia; Hungary; Poland; and Slovenia. Waiting in the wings are Bulgaria, Romania, Slovakia, Latvia and Lithuania (as it can be seen in the map below) In this map we can see all the countries that can be in the enlargement of the European union, in the first wave they are Poland, Czech Republic, Hungary Slovenia and Cyprus (country that we are going to speak during the essay),. In a second wave there will be countries such as Latvia, Lithuania, Slovakia, Romania and Bulgaria. In the last place we can see to Turkey, which is only an applicant country. The process of joining the EU is largely a technical one. All the candidates are receiving a great deal of help and instruction from the European Commission and from individual member states on what it means to be an EU member. Globalization and EU enlargement will shape the future of Europe over the next decades. The eastward enlargement of the European Union is not only a political issue or an effort to reunite peoples sharing a common history, culture, and spiritual values. It is also a process through which Europe's firms seek to enhance their competitiveness by taking advantage of market proximity, lower labor costs in Central and Eastern Europe, and the natural resource endowments of the candidate countries. ...read more.

The Attorney-General is the legal adviser of the President and of the Council of Ministers. 6.-Sitution of cyprus Cyprus, republic, and third-largest island in the Mediterranean Sea, located west of Syria and south of Turkey. The island has a maximum length of about 225 km (140 mi) from Cape Andreas in the north-east to the western extremity of the island. Its maximum width, from Cape Gata in the south to Cape Kormakiti in the north, is about 97 km (60 mi). The total area of the country is 9,251 sq km (3,572 sq mi). Nicosia is the capital and largest city. Since 1974 the northern third of Cyprus has been occupied by Turkish troops and has formed, de facto, a separate (though officially unrecognized) state. Population Greek-speaking Cypriots make up about 80 per cent of the population. About 18 per cent of the population is of Turkish extraction, and the remainder is made up of Armenians and other ethnic groups. Both the Greek and Turkish communities retain the way of life, customs, and, to a great extent, the national identity of their co-religionists on the mainland. Mass migrations since the Turkish invasion in 1974 have effected a virtually complete geographical separation of Greeks and Turks, with the former occupying the southern two thirds of the island and the latter occupying the remainder. ...read more.

For the integration of Cyprus would be completed they should: * reaffirms the suitability of Cyprus for accession to the European Union and confirms the European Union's will to incorporate Cyprus in the next stage of its enlargement, * regrets the lack of progress in the inter-communal talks taking place under the auspices of the UN Secretary General and calls upon all parties to step up their efforts to achieve a comprehensive settlement of the Cyprus question in accordance with UN Security Council resolutions, based on the concept of a bi-communal and bi-zonal Federation, * considers that the developments noted in the last few months have enabled elements which could be useful for defining an agreement to be identified, * considers that Cyprus' accession to the EU should bring increased security and prosperity to both communities on the island. In particular it should allow the North to catch up economically and should improve the outlook for growth and employment, particularly for the Turkish-Cypriot community. The Council considers that this community must perceive the advantages of EU accession more clearly and its concern at the prospect must be allayed. The Council calls upon the Commission to organize the requisite contacts to this end with the Turkish-Cypriot community, in consultation with the Government of Cyprus. * Concrete proposals for a specific strategy in preparation for accession, including a structured dialogue, the precise details of which will be established in accordance with the Annex hereto. ...read more.