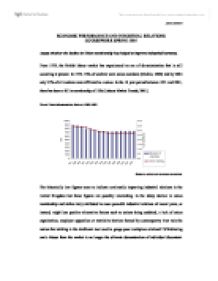 ECONOMIC PERFORMANCE AND INDUSTRIAL RELATIONS COURSEWORK SPRING 2005 Assess whether the decline in Union membership has helped to improve industrial harmony. From 1979, the British labour market has experienced an era of de-unionisation that is still occurring at present. In 1979, 53% of workers were union members (Machin, 2000) and by 2004 only 27% of all workers were affiliated to a union. In the 10 year period between 1991 and 2001, there has been a fall in membership of 15% (Labour Market Trends, 2001) TRADE UNION MEMBERSHIPS, BRITAIN, 1989-2003 SOURCE: OFFICE OF NATIONAL STATISTICS The historically low figures seem to indicate continually improving industrial relations in the United Kingdom but these figures are possibly misleading. Is the sharp decline in union membership and strikes truly attributed to more peaceful industrial relations of recent years, or instead, might less positive alternative factors such as unions being outdated, a lack of union organisation, employer opposition or restrictive barriers formed by contemporary laws ruin the notion that striking is the traditional tool used to gauge poor workplace relations? Withdrawing one's labour from the market is no longer the ultimate demonstration of individual discontent. The association of a union decline with fewer strike occurrences is possibly not indicative of more peaceful attitudes at work. ...read more.

coal workers). Machin (2001) is revealing in his findings, stating that "For men it used to pay to be in a union in the early 1990's, and it used to pay to join a union, but by the end of the 1990's it does not. For women...it does pay to be in a union, but not by as much as it used to, and it does not pay to newly join". The opportunity cost of withdrawing cooperation is calculated to be an expensive and often unnecessary mistake. The increased cost in organising stoppages due to new legislation such as 1980 Picketing Act and the implementation of Secret Postal Balloting in 1993 has made union processes expensive and provided many administrative, as well as legal, barriers when complying with the law. The tightening up of the law has reformed the actions of trade unions and again decreased their involvement in industrial matters. A legislation index calculated by Freeman and Pelletier (1990) suggested that the changes in the law were "responsible for the entire decline" in union membership density levels. Conversely, individual rights in the workplace have heightened, the individual voice being given more notice and the right of appeal encouraged. The law has undermined collectivism - possibly the greatest reason for the demise of unionism. ...read more.

It would appear that the impact of fewer collective strikes under the umbrella of the trade union is offset by individual grievances and disruptions. In conclusion, it is likely that discontent within industries will be present even without the confidence of guaranteed support from a union. Unions are considered unwelcome and unnecessary by many employers and employees. The era of militancy seems to be over but it is an impossibility to keep all British the workers happy. The rising occurrence of tribunals and ACAS cases are perhaps illustrating the increasing difficulties unions have in expressing the views of the workforce due to legal and administrative restrictions imposed. Individuals have at their disposal alternative options which they can pursue leading to more lucrative rewards, and because of the currently booming economy that has not encountered a severe recession in the last decades, there is more likely to be a disregard for a collective bargaining tool that battles for positive real wage growth; this is already present. Industry composition factors and attitudes against unions make union membership far less appealing and not as essential as was evident in previous decades. Finally, it is understood that discord in the workplace is an inevitability, but is not clear as to the extent to which declining membership levels can be directly correlated to more harmonised relations in the workforce. ...read more.