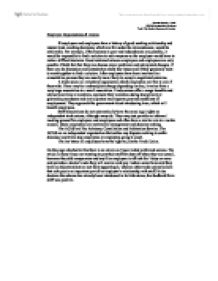 Employee Organisations & Unions If employers and employees have a history of good working relationship and mutual trust, reaching decisions, which are fair under the circumstances, would be achievable. For example, if the business is poor and redundancies are possible, it would be impossible to find a solution to suit everyone so the employer would have to make a difficult decision. Good relations between employers and employees are only possible if both feel that they can discuss major problems and anticipated changes, if there can be discussion and consultation about key issues and if they genuinely want to work together to find a solution. After employees have been involved in a consultative process they are usually more likely to accept a negotiated outcome. A trade union is a voluntary organisation which employees are free to join if they wish. ...read more.

On the page attached to this there is an article on Tesco linked with trade unions. The article is about Tesco not wanting to pay their staff for days off when they are unwell, however they did compromise and say if an employee is off sick for 3 days or more and provides a doctor's note they will receive sick pay. Usdaw union have said they have no objections but are not fully supporting it, whereas other trade unions believe that sick pay is an important part of an employer's relationship with staff. It also declares the scheme has already been introduced in its Irish stores; the feedback from staff was positive. Unions watch Tesco sick day plan More controversial, however, is the idea of only giving sick pay if people are off for more than three days and provide a doctor's note. ...read more.

Good Reception Sick leave - real and feigned - currently costs UK businesses an estimated �11bn a year. Tesco, which recently reported profits of �1.7bn, said it was looking to cut levels of unplanned absence and is introducing the measures in about 20 stores. It has already introduced the scheme in its Irish stores, where the company says absenteeism rates are lower. It added that feedback from staff was positive. By law a company in the UK is not obliged to pay for sick pay itself, and it is down to contractual agreements between the workers and employer. The state, however, does underwrite a set level of support - known as "statutory sick pay" - to workers after the third day off. Is Tesco right to not pay workers who take the day off because of sickness? ?? ?? ?? ?? Natasha Sandhu 12WP GNVQ Intermediate Business Task: The Human Resources Function ...read more.