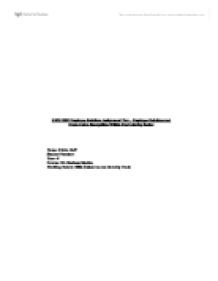 Employee Relations and Trade Union Recognition Within The Catering Sector.

HRM 3005 Employee Relations Assignment Two - Employee Relations and Trade Union Recognition Within The Catering Sector Name: Claire Duff Student Number: Year: 4 Course: BA Business Studies Marking Tutors: Billie Osbourne and Dorothy Foote Introduction For The Attention Of The Human Resources Director The hotel and catering industry represents around 10% of the working population of this country. Two and half million in total. Conversely it is seen as a principle industry in many other countries. Within the UK, historic sites and counties which depend heavily on tourism, such as Cornwall and Devon, also rely heavily on this sector of industry to provide the services required. Without this added aid popular hotels would cease to function properly and other groups within the business world would suffer a knock on effect from lack of trade. So although the hotel and catering industry is a specific thing many other issues depend upon its success. With this in mind I am going to investigate the pros and cons and implications of instigating a potential claim for recognition of a trade union both now and in the future. This report has been completed after I have research and read copious papers on the subject. Terms and Conditions There are many reasons why the terms and conditions remain so poor within the catering and hotel industry. The main factor for any employee is obviously the pay and hours of work. Unfortunately, within this sector of industry, pay is substantially lower than in many other areas of business, with 30% of hotel and catering workers earning �3.60 per hour and with 50% earning less than �4.50 per hour. ...read more.

However due to the high job turn over, many people do not believe that trade unions really belong within the hotel and catering sector of business. Perhaps this is the reason why only 6% of the industry are trade union members. Finally the catering sector fills that it does not have the bargaining power that other industries have. For example the gas workers have the ability to paralyse the whole of industry in a way that the caterers would never be able to do. Managers Reluctance Towards Trade Unions From research it has been established that employers and managers within the hotel and catering sector are generally hostile towards trade unions. This skepticism has always been in the industry and in 1970 a commission on industrial relations acknowledged these findings. Managers see trade unions as a way to disrupt or interfere with the smooth running of their hotel/restaurant. "Managers disliked unions because they interfered with their prerogative, slowed down the decision making process, created dual sources of authority within the organization, were opportunistic and unsympathetic to and ignorant of the way in which the industry worked." (Trade unions in the hotel and catering industry, The views of hotel managers, Employee Relations, Bradford 1993, Volume 15, Issue 2, Start Page 61.) In the hotel and catering industry it is generally recognized it is the manager's responsibility to see that the employees are properly looked after and are getting job satisfaction. It is felt that the unions do not have the ability to add any more value to this situation. Also individual managers are allowed to run their hotels as they see fit which, could, if unions flex their muscles, contradict policies from the organizations head office. ...read more.

These benefits would also help the organization as a higher percentage of employee loyalty will be achieved and the need for continuous recruitment would decrease as job turn over should decline. The aim of the committee is to show the employees that management care and share their concerns. This would be the same function that a trade union representative would perform. With the committee in place an individual can raise a specific problem personally. Thereby nullifying the need for a trade union. Listed below are many factors that show the implementation of a trade union is not in the best interest of the organization. Employees * There are dual negotiation rights (two unions) * Poor employee recognition of the union (only 6%) * Employees question value for money * High percentage of casual / part time workers * High job turn over Employer * Disrupts the smooth running of an organization * No value for the employer * Unskilled labour equals low pay In conclusion I do not feel that increasing trade union membership within the hotel and catering industry is in our best interest. I also strongly believe that it is against the wishes of the majority of the employees within this sector. With my above proposals, which can be implemented with little expenditure, we as a company could sustain an enhanced relationship between us and our employees, without having to resort to involving trade unions. Although I wished to be pro-active towards implementing a trade union and hoped to advise on possible strategies to ease such a transition I find that the evidence is overwhelmingly against such a step. I feel it would be a dereliction of my duty to you and the board if I put forward a different solution. Richard. J. Hughes. Employee Relations Manager. ...read more.