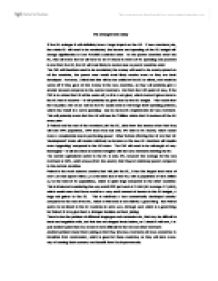 EU enlargement essay If the EU enlarges it will definitely have a large impact on the UK. If new members join, the whole EU will need to be revaluated, the income and spending of the EU budget will change significantly as new POORER countries enter. As the poorer countries enter the EU, this will mean the UK will have to be re-valued in terms of EU spending and payment to and from the UK, the UK will most likely to receive less as poorer countries enter. The CAP will therefore need to be revaluated, the money will need to be evenly spread on all the countries, the poorer ones would most likely receive more as they are least developed. However, I think that this will be too costly for the EU to afford, and would be worse off if they gave all the money to the new countries, so they will probably give a smaller amount compared to the current members. But from the UK's point of view, if the CAP is re-valued the UK will be worse off, as it is a net-giver, which means it gives more to the EU than it receives - it will probably be given less by the EU budget. This would alter the UK policy; the UK as well as the EU would need to rearrange their spending patterns, which may result in a cut in spending - due to excess EU requirements for new members. ...read more.

Another bonus of the huge single free market is specialisation. Specialisation means that the more efficient countries or countries that are comparatively more efficient get to trade over the free trade area without any problems. From UK's point of view for all the new countries joining the EU, it will be a much larger market mainly with more people to trade with, which would be beneficial for the UK's economy. Every country needs to trade to survive, as most countries do not have every resource that they require on their land. There is also the option of cheaper labour, and more 'willing' workers - who will do the jobs that are not so appreciated by UK residents, for example road-cleaning. But the opposing option is that anyone could come into the country as there is free movement of labour (as in no-one can stop them moving) which could mean that they may swamp markets (this is going to be controlled by the EU). So overall, enlargement could be both beneficial and disadvantageous for the EU members, the effects of Poland joining the EU on the UK I think will be overall not that much more than if they hadn't joined. This is because the UK has a large enough market without them in and the UK will just end up losing out on more money. If all the 12 countries joined -that would be beneficial for the UK as it is a significant increase in trading partners and the UK can justify the loss with lots of members joining. ...read more.

The re-distribution ideals of the EU will be tested by such enormous strains on the sums available. Already, the Polish farmers have had to accept only 25% of the CAP payments made to their older member counterparts. Critics point to some countries and note the ancient forms of agriculture still used in these economies. Opponents are also concerned by the ability of the agencies charged with managing the economy of even more nations. What will be a realistic and appropriate short-term interest rate for such a diverse group of nations. Will the Euro be able to stand alone in the international currency markets if a 'run' against its value arises? Socially some fear an influx of economic migrants who will be attracted by better living standards within what is, in theory a free area of movement. What final worry amongst some is the attitude of citizens of the richer member states towards paying the taxes needed to bring the poorer members nearer to the mean living standards of the EU. The new members that are going to join will definitely boost the EU in world terms, getting over 500 million people making it 1 of the largest if not the largest market in the world with greatest economic significance. There are many factors that need to be overcome, economic, political, legal and social which need to be aligned with the EU ones and then integration can occur. The EU will benefit from more members joining and may also (in many years time) become the world's only market, where everyone is part of it. ...read more.