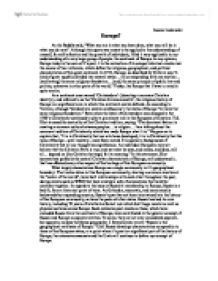 Jessica Leskowski Europe? As the Buddha said, "What you are is what you have done, what you will be is what you do now". Although this quote was meant to be applied to the understanding of oneself, for self-reflection and the growth of individuals, I find it very applicable to my understanding of a very large group of people: the continent of Europe. In my opinion, Europe today is the sum of it's past; it is the collection of its unique historical events over the course of two millennia, which define the religious, geographical, and political characteristics of this great continent. In 1751, Europe, as described by Voltaire was "a kind of great republic divided into several states... all corresponding with one another... [and having] the same religious foundation... [and] the same principle of public law and politics, unknown in other parts of the world." Today, the Europe that I have in mind is quite similar. As a continent once named 'Christendom' ( denoting a common Christian identity ), and referred to as the 'Christian Commonwealth', the religious history of Europe is a significant area in which this continent can be defined. ...read more.

In this statement, Eliot summarizes perfectly the central Christian characteristic of Europe, as I understand it, that has affected every other aspect of the heritage of this European community. What largely characterizes Europe as a single community is it's geographical boundary. The twelve states in this European community, sharing a common location at the "center of the world", have built relationships with each other throughout the past, during events such as WWII that have created a web of connections that hold the continent together. In regards to the issue of Russia's membership in Europe, Russia is a bad fit, from a historical point of view. An Orthodox, autocratic, and economically backwards but expanding country, Russia's past has not been intertwined into the history of the European community, as have the pasts of other states. Russia has had its own history, including 70 years of totalitarian Soviet rule which built huge mental as well as physical curtains across Europe. Such extensive past events as these, which have excluded Russia from the continent of Europe, have contributed to the general concept of Russia and Europe as separate entities. ...read more.

However, this diversity has not prevented the economic and political development of the continent, which, as a result, has known power and status as a world leader. Europe is a continent that, for much of its past, has attracted the attention of the world and has been the focus of much of the world's written history. 'Europe', often taken as a synonym for harmony and unity, is an ideal towards which Europeans have been and will continue to strive. Throughout my education I have learned of a Europe that has not yet come close to attaining that goal of unity. Rather it has been a continent for which there are many problems in defining. Most historians would agree that the subject-matter of European history must concentrate on the shared experiences which are to be found in each of the great epochs of Europe's past. In my knowledge, Europe is its history. Its religious, geographical, and political characteristics are defined by the collective events of its past. Putting my understanding of Europe in perspective, combined with the wisdom of the Buddha, just as Europe's past has defined what it is today, it's present will define what it will become. ...read more.