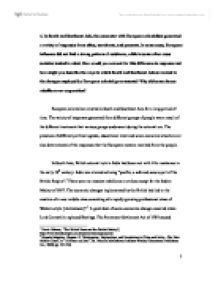 4. In South and Southeast Asia, the encounter with European colonialism generated a variety of responses from elites, merchants, and peasants. In some cases, European influence did not find a strong pattern of resistance, while in some other cases societies tended to rebel. How would you account for this difference in response and how might you describe the ways in which South and Southeast Asians reacted to the changes employed by European colonial governments? Why did some choose rebellion over cooperation? European colonialism existed in South and Southeast Asia for a long period of time. The variety of responses generated from different groups of people was a result of the different treatments that various groups underwent during the colonial era. The presence of different political agenda, educational level and socio-economic situation are also determinants of the responses that the European masters received from the people. In South Asia, British colonial rule in India had been met with little resistance in the early 19th century. India was viewed as being "pacific; a safe and secure part of the British Empire".1 There were no massive rebellions or strikes except for the Indian Mutiny of 1857. The economic changes implemented by the British had led to the creation of a new middle class consisting of a rapidly growing professional class of Western-style [intellectuals]".2 A great deal of socio-economic change occurred when Lord Cornwallis replaced Hastings. ...read more.

They formed associations and clubs and increasingly used Indian aspects such as Hinduism as a rallying point to get the Indians together against the foreign rule. However, most of their actions were rhetoric and too intellectual. Hence they were not able to gain much support from the masses or connect with the rural peasantry. In general, Indian nationalistic movements which were mostly initiated by the intellectuals were not considered aggressive. They used techniques of passive resistance and non-violent protest against the British. Gandhi, the leader of Indian independence movements, also adopted no-violent ways to independence. However, the British government's response to peaceful protests was often repressive, causing an initial peaceful protest to turn violent. The "Amritsar Massacre" in ended all efforts of cooperation with the colonial government for gradual reform and saw the "beginnings of mass movement for independence."7 The people came to see rebellion as perhaps the only way to make themselves heard and achieve independence. European colonial governments in Southeast Asia generally did not face a strong pattern of resistance in its early stages as most of the people were willing to cooperate with the colonial masters until the 1920s and 1930s. Members of the traditional ruling class, immigrants or newly risen classes were collaborators, working for the European colonial government. ...read more.

such example of the consequence of the economic depression.13 In Malaya, there was little or no resistance to colonialism and any presence of nationalism usually took the form of economic nationalism, with a racial tone, by the indigenous Malays. This was probably due to the fact that the large influx of Chinese and Indian immigrants into Malaya caused the minorities to feel that they were being exploited. The immigrant Chinese in Southeast Asia in particular, enjoyed great economic powers, dominating almost all "retail trade" in most Southeast Asia.14 Because of this anti-Chinese and in Burma, anti-Indian sentiments, Chinese and Indians in Southeast Asia were not willing to go against the colonial powers since they were able to enjoy some form economic security under them.15 Any form of nationalism which existed was instead related to Malay discontentment against the Chinese than opposition against the Europeans. European colonialism had resulted in various reactions from the people. Those who benefited from their rule were satisfied in seeing the continuation of European rule in the early years while those who suffered wished to see a change in governance. As the locals became more educated, their expectations increased and they wished to see their own states being ruled by their own people instead of foreigners. This change of attitude was to affect the way these groups cooperated with the European colonial masters. ...read more.