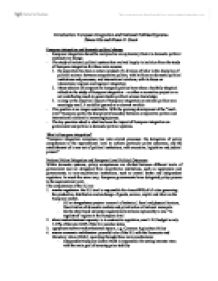 EU law are individual citizens rather than the EU statesand that the EU Treaty and secondary legislation are part of the domestic law of the member states - "supremacy" means that if there is a conflict between domestic law and EU law, then EU law is sovereign 4. lobbyism: over 1.000 lobby groups have offices in Brussels with the specific aim of trying to influence the EU policy process. The fact that the Commission is understaffed, requires policy expertise in the highly technical process of harmonizing the diverse European market, and needs the support of certain constituencies for legislation to pass the Council and the EP, ensures relatively open access for private interests at a very early stage of the policy process European Outcomes: New constraints, Reinforcements and Catalysts Political outcomes at the European level have both direct and indirect impacts on domestic political systems: 1. direct impacts are outcomes that require domestic policies to be changed to conform to new European-wide norms 2. More interesting for the present study is the indirect impact of European governance outcomes on domestic political institutions and input processes in domestic political systems: a) European governance outcomes have a significant indirect impact on institutional processes - In the area of administration European integration propels member states to introduce new regulatory policy styles - In the field of judicial politics, the institutional design of the EU legal system, which allows national courts to apply EU law, strengthens the judicial review powers of national courts vis-�-vis domestic executives b) ...read more.

Europeanization tends to be discussed in substantive term, while the procedural characteristics, which can only be adequately grasped from a longer term perspective, are often neglected Explaining the European Effect: Varieties of Institutionalism Four main categories for institutionalist explanatory accounts: 1. explanations that operate principally at a macro-institutional level and conceive of both European integration and, in particular, the national effect primarily in institutional terms 2. accounts that adopt a broad understanding of institutions, but again understand the European effect primarily in institutional terms 3. studies that stress individual utility calculations in explaining European effects 4. analyses that likewise emphasize individual behavior, but refer to a "logic of appropriateness" in explaining patterns of national reaction to European integration Conclusion To summarize in order to advance beyond the present state of the analysis of the domestic impacts of European integration, the analytical and theoretical reach of this emergent field of comparative research needs to be broadened in several directions: 1. the present emphasis on policy and institutional aspects needs to be complemented by more sustained efforts at examining the domestic political effects of integration 2. in studying the European impact, substantive effects can only be properly understood if more systematic attention is paid to the modes and processes of domestic Europeanization 3. While it is necessary to disentangle European integration as an explanatory variable and the European effect as a dependent variable, both will need to be "re-entangled" if we wish to do justice to the real-life interdependency of forces of economic, political and cultural change ...read more.