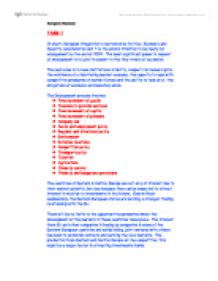 European integration is motivated by Political, Economic and Security consideration and it is the union's intention to be ready for enlargement by the end of 2002.

TASK 1 In short, European integration is motivated by Political, Economic and Security consideration and it is the union's intention to be ready for enlargement by the end of 2002. The most significant power in respect of enlargement is to give its assent to the final treaty of accession. The main aims is to have institutional stability, respect for human rights, the existence of a functioning market economy, the capacity to cope with competitive pressures of market forces and the ability to take on all the obligations of economic and monetary union. The Enlargement process involves: * Free movement of goods * Freedom to provide services * Free movement of capital * Free movement of persons * Company law * Social and employment policy * Regional and structural policy * Environment * External relations * Competition policy * Transport policy * Taxation * Agriculture * Financial control * Financial and budgetary provisions The countries of Eastern & Central Europe are not only of interest due to their market potential but also because they can be expected to attract interest in relation to investments in the future. Even without membership, the Eastern European states are building a stronger trading relationship with the EU. ...read more.

It focuses its assistance in four areas: * Internal restructuring including legal * Modernisation of financial services * Privatisation of small & medium-sized businesses * Development of the labour market and social sectors The extent of structural change in the economy is already producing rapid growth from new healthy roots. It looks as though enlargement is a win-win process. MALTA HISTORY In 1956 a referendum for the complete integration with Britain was approved, however, by 1958 an independent movement began to grow. In 1962, a constitution was approved so that the British colony could become a state will full internal self-government, although the new legislative assembly favoured full independence. On 21st September 1964, Malta became an independent constitutional monarchy. In 1974 the constitution was amended and Malta became a republic within the commonwealth. In May 1987, Edward French Adami was elected prime minister and on 16th July 1990, Malta applied for full EU membership. Also in 1992, the government continued with its policy with liberalization with import barriers being reduced in line with the country's aspiration too gain membership with the EU. In June 1993 the commission of the EU announced that Malta had all the qualifications for EU membership, although they would have to implement certain economic reforms & legislative measures in order to gain entry. ...read more.

ADVANTAGES * The benefits of enlargement outweigh the costs. Although the benefits are relatively larger for the acceding countries, because they start from a lower economic base. * Enlargement if well conducted, will bring major benefits both to the existing Union and to the acceding countries. * For both the current member states and for the candidate countries preparing to join, enlargement offers advantages in terms of strengthening the area of freedom, security and justice, providing a boost to economic growth and attracting from outside, which strengthens Europe's place in the world. * Benefical effects of the various policies for reducing inflation and anchoring exchange rates. * Member states run considerable surpluses on their export trade with candidate countries and these translate into more jobs and more tax Revenue and more money for social security systems. * An opportunity to increase living standards and improve prospects in global competition. DISADVANTAGES * The changes taking place in the candidate countries have led to social problems and in particular to marked social stratification and in some cases high unemployment. * Enlargement will strain the EU budget. Need to finance the enlargement with the framework given by the interinstitutional agreement of 6th May 1999. * Tariffs on agricultural products would be high. * No commitment to move quotas, which is considered the biggest barriers to trade. ...read more.