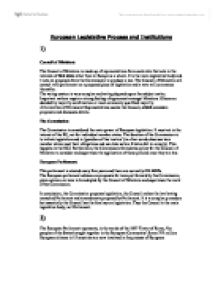 European Legislative Process and Institutions 1) Council of Ministers: The Council of Ministers is made up of representatives from each state that acts in the interests of that state rather than to Europe as a whole. It is the main legislative body and it acts on proposals from the Commission to produce a law. The Council of Ministers will consult with parliament on a proposed piece of legislation and a vote will commence thereafter. The voting system is very complex and voting depends upon the subject matter. Important matters require a strong feeling of agreement amongst Ministers. Others are decided by majority confirmation or most commonly qualified majority. A Committee of Permanent Representatives assists the Council, which considers proposals and discusses details. The Commission: The Commission is considered the main power of European legislation. It must act in the interest of the EU, not for individual member states. The function of the Commission is to initiate legislation and is 'guardian of the treaties' (in other words observes how member states meet their obligations and can take action if states fail to comply). ...read more.

as in France. � If the Member State is duelist, EU law will not become binding internally, as part of domestic law, until it is turned into a domestic statute, e.g. as in the UK, Germany, Belgium and Italy. However, this does not settle the question of priorities. This will depend on the extent to which the Member State has provided for this, either in its constitution or in its statute of incorporation. Because of the wide variation in the way Member States have provided for this question of priorities, and to ensure uniformity of application, the ECJ developed its own constitutional rules to deal with the problem of the principle of supremacy or primacy of EU law. In a series of important rulings the ECJ has developed the doctrine of supremacy of EU over national law. 1. The first case established the EU as an independent legal order from the Member States: Van Gend en Loos [1963] 2. However, it was the case of Costa v ENEL [1964], that introduced the doctrine of supremacy. ...read more.

� Under s2 (4) any enactment passed or to be passed, shall be construed and have effect subject to the foregoing provisions of this section [i.e., obligations of a Community nature]. � Under s3 (1) any question as to the meaning or effect of any of the Treaties, or as to the validity, meaning or effect of any Community instrument, shall be treated as a question of law and, if not referred to the ECJ, be determined in accordance with the principles laid down by the ECJ. The Approach of the UK Courts The UK courts, led by the House of Lords, have shown a clear willingness to accord supremacy to directly effective Community law, either by a (fictional) 'construction' of domestic law, or, where necessary, by applying EC law directly, in priority over national law. However there is the possibility of Express Repeal. It has been made clear that if Parliament were expressly to attempt to repudiate its EU obligations, our courts would be obliged to give effect to Parliament's wishes. Whilst this is unlikely to happen as long as we remain members of the EU, it is a theoretical possibility and the principle of Parliamentary Sovereignty remains intact. ...read more.