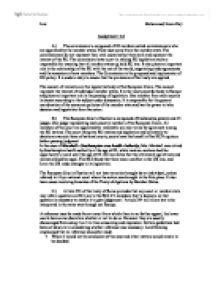 Assignment 3.6 A.) The commission is composed of 20 members called commissioners who are appointed by the member states. They must come from the member state. The commissioners do not represent their own countries but they work and represent the interest of the EU. The commission have a part in making EU legislation and are responsible for ensuring that all member states up hold EU law. It also plays an important role in the relationship of the EU with the rest of the world, negotiating trade agreements and the accession of new members. The Commission is the proposed and implementer of EU policy. It is under a duty to ensure that the provisions of the treaty are applied. The council of ministers are the legislative body of the European Union. The council represent the interest of individual member states. It is the most powerful body in Europe and plays an important role in the passing of legislation. One member from each country is chosen according to the subject under discussion. It is responsible for the general coordination of the economic policies of the member state and has the power to take decision and legislation from the union. ...read more.

C.) Article 234 of the treaty of Rome provides that any court or member state may refer a question on EU Law to the ECJ if it considers that 'a decision on that question is necessary to enable it to give judgement.' Article 234 will allow law to be interpreted in the same way through out Europe. A reference must be made from a court from which there is no further appeal, the lower courts have some discretion whether or not to do so. However they are usually discouraged from using it as it is time consuming and expensive. Certain guidelines had been set down in to considering whether reference was necessary. Lord Denning emphasised that no reference should be made: * Where it would not be conclusive of the case and other matters would remain to be decided * Where there had a previous ruling on the same point * Where the court considers that point to be reasonable clear and free from doubt. * Where the facts of the case had not yet been decided. ...read more.

In this case Harriet should be allowed to make a reference to the ECJ. This is because the only way they can go ahead with the case is with the ECJ giving an opinion on how they interpret the law. ii) English Winemakers plc has appealed its case on unfair competition as far as the House of Lords. The court of appeal has already accepted that an interpretation of European law would decide the outcome of the case. iii) Sarah has made a claim for equal pay in an employment tribunal, her claim is for equal pay with a man who has taken over her job that she formerly did. An ECJ reference in Macarthys v Smith has already identified that it is possible to claim equal pay with a man who held the position prior to the woman who was claiming. In this case they will not need to refer to the ECJ, as there is a case similar to it. Lord Denning emphasised that no reference should be made where there had a previous ruling on the same point. The equal pay act would mean that the case is clear and and her claim is reasonable. Law Mohammed Imran Daji ...read more.