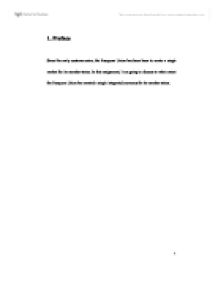 These policies affect a wide range of economic and political life-from employment contracts to the quality of drinking water, and from local economic development to industrial subsidies, etc. With the financial support from the EU budget, these common policies not only change the nature of economic governance in member states but also promote convergence towards the single market. (Lintner V, 2001) With the establishment of common policies and all the other achievements above, the European Union seems to have done a great job to create a single integrated economy for its member states. However, in fact, the Internal Market is not complete. There are still not only divergences in business environments between member states but also areas where the integration is incomplete. 4. Major Divergences and Incomplete Integrations 4.1 Different Corporate Governance Regimes Because the big business firm plays an integral role of the economies of the EU member states, understanding how they are governed is a necessity to understand the governance of the economies. (Moran M, 2001) Unfortunately, when understanding this, people will find there is a major divergence of the corporate governance regime in Germany and the corporate governance regime in the UK. These two systems can be highly distinctive in the following aspects. ...read more.

However France and Germany have broken the rule for twice and will breach it for a third time in 2004. (Parker G, 2003) In some cases, even the achieved success can be out of date and needs modifications. For example, the Common Agricultural Policy was once successful in assuring the supply of foods, stabilising the market. But it now is considered to have cost too much of the EU budget and damaged the environment. Thus the European Commission has prepared proposal to reform this policy to meet the new need. (Defra, 2003) 5. Conclusion Although in the last fifty years, the European Union has been keen to create a single economy for its member states and achieved many great successes, such as the Single European Market, the single European currency-the Euro, all these achievements are enough for a true single economy. For various reasons, there still exist major divergences in the business environments within member states which are not likely to be changed in a short time. Besides these, there are also areas where the integration is not complete. Even the European Union can achieve all of these, new challenges will consistently arise. Thus, all the member states need to put more effort to cooperate with each other in order to reach the goal of creating a true single economy for their own. 6. ...read more.