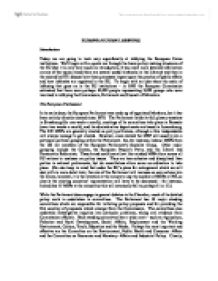 EUROPEAN UNION LOBBYING Introduction Today we are going to look very superficially at lobbying the European Union institutions. We'll begin with a quick run through the basic policy making structures of the EU (but it is only very much an introduction; if you want more detailed information on any of the topics raised there are several useful textbooks in the Library) and then in the second half I'll discuss how these processes impact upon the practice of public affairs and how lobbyists are regulated in the EU. To begin with an idea about the scale of lobbying that goes on in the EU institutions - in 1992 the European Commission estimated that there were perhaps 10,000 people representing 3,000 groups who were involved in lobbying the Commission, Parliament and Council of Ministers. The European Parliament In its early days, the European Parliament was made up of appointed Members, but it has been entirely directly elected since 1979. The Parliament holds its full plenary sessions in Strasbourg (for one week a month), meetings of its committees take place in Brussels (over two weeks a month), and its administrative departments are based in Luxembourg. The 626 MEPs are generally elected as party politicians, although a few independents will always manage to get elected. However, once elected the MEP will usually join a particular political grouping within the Parliament. So, for instance, Labour MEPs from the UK are members of the European Parliament's Socialist Group. Other major grouping include the Greens, the European People's Party, and the Liberal and Democratic Reformists. These broad coalitions allow like-minded MEPs from across all EU nations to coalesce on policy issues. They are less cohesive and disciplined than parties in national parliaments, but do nevertheless allow some co-ordination to take place. (Do also keep in mind that under the EU's plans for enlargement which we will deal with in more detail later, the size of the Parliament will increase as new nations join the Union; however, it is the intention ...read more.

The European Council provides a forum in which not only the internal development of the Union can be discussed but also the EU's relationship with external bodies. So the meetings will allow the EU to devise a common negotiating position when dealing collectively with, for instance, the United States or Japan, the United Nations or World Trade Organisation. While the European Council is in a sense the place where the EU's most senior politicians arrive at decisions, if these require European legislation it is unable to simply insist that the policies be adopted and implemented immediately because any necessary legislation must go through the normal process which we will consider next week. However, the heads of government are obviously able to make final political decisions and implement those unilaterally if they do not require legislative backing. One academic has concluded that, "The record of the European Council is mixed. On the one hand there have been failures, or at least the non-fulfilment of hopes. This was particularly true in the period from about 1980 to 1988: summits became rather routinised and immersed in detail; too much time was devoted to policy detail rather than to mapping out the future; and disputes about distributional issues were seemingly always on the agenda. On the other hand there have been positive achievements: understandings between national leaders have been furthered; important goals have been identified/given an impetus/brought to a conclusion (such as on enlargements, the internal market, the social dimension, institutional reform, and EMU); and agreements have been worked out on matters that were either unsuitable for, or could not be resolved by, the Council of Ministers." The EU legislative process and lobbying Broadly speaking, formal proposals for EU legislation are initially made by the European Commission (although some proposals may have started out as recommendations to the Commission by the Parliament). So the Commission issues a proposal which is subject to consultation by the Parliament and the Council of Ministers. ...read more.

Ford's report quite consciously avoided providing any rigid definition of who constituted a lobbyist - rather anyone who had occasion to visit the Parliament building on a regular basis would be covered by his register. The idea here was that the less complex was the scheme suggested, the more chance it would have of being accepted. However after the report was drafted (on behalf of the Committee on Rules of Procedure), it was submitted to a number of other standing Committees for their consideration. One of these - the Committee on Social Affairs and Employment - decided that the report should include provisions relating to the acceptance by MEPs of financial assistance from outside groups. Once these two issues became linked - lobbying and the regulation of members' interests - the Ford report was in serious trouble. In January 1996 the Parliament debated Ford's report and referred it back to the CRP committee for revision. Finally in July 1996, a compromise of sorts was reached so that MEPs now have to declare their outside interests while lobbyists would be registered by the Parliament in return for obtaining a pass provided that they signed a code of conduct. This scheme came into force in June 1999. The code of conduct which lobbyists must adhere to is fairly basic. In fact, though, the code does not define lobbying. It simply states that the register and code will apply to all those who are issued passes to the European Parliament on the basis that they "wish to enter Parliament's premises frequently with a view to supplying information to Members within the framework of their parliamentary mandate in their own interests or those of third parties". Among its provisions are that lobbyists shall: * "state the interest or interests they represent in contact with Members of Parliament, their staff or officials of Parliament; * refrain from any action designed to obtain information dishonestly; * not claim any formal relationship with Parliament in any dealings with third parties; * not circulate for a profit to third parties copies of documents obtained from Parliament". ...read more.