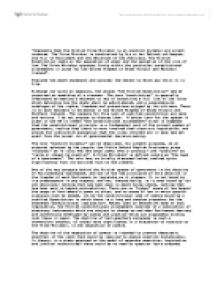 Evaluate the above statement and consider the extent to which you think it is true.

"Arguments that the British Prime Minister is an elective dictator are arrant nonsense. The Prime Minister is constrained by his or her Cabinet colleagues, the will of Parliament and the decisions of the Judiciary. The British Constitution rests on the separation of power and the operation of the rule of law. The Prime Minister operates firmly within the particular constitutional arrangement in place for the United Kingdom of Great Britain and Northern Ireland". Evaluate the above statement and consider the extent to which you think it is true. Although not quite an oxymoron, the phrase "the British Constitution" may be perceived as something of a misnomer. The term "constitution" is generally understood as meaning a document or set of containing a full list of the rules which determine how the state shall be administered, and a comprehensive catalogue of the rights, freedoms and protections enjoyed by its citizens. There is no such document in existence in the United Kingdom of Great Britain and Northern Ireland1. The reasons for this lack of codified constitution are many and various. I do not propose to discuss them. A better term for the system in place in the UK is indeed "the constitutional arrangement" since it suggests that the constitutional principle is a fundamental part of the current system of government, implies that there is more involved than clear-cut legislation, and avoids the instinctive assumption that the rules involved are in some way set apart from the normal run of governmental decision-making. The term "elective dictator" can be described, for present purposes, as an autocrat selected by the people: the Little Oxford English Dictionary gives "dictator" as "a ruler who has total power over a country," and "elective" as "using or chosen by election". A Prime Minister2 is defined simply as "the head of a government". The role has, as briefly discussed below, evolved quite significantly from its earliest form to the present. ...read more.

and agreement to uphold the principles of the Council of Europe's European Convention on Human Rights: however, the potential and actual functions of the European Courts in checking the activities of the British government will not be considered here. This is not to say that the institutions of government are wholly powerless in the face of the Prime Minister's whims: should the executive or the legislature so choose, a confidence vote can be demanded, and by the same level of convention that binds the members of the Cabinet to lend public support to government policies or resign, a Prime Minister losing such a vote is expected to stand down in his own turn18. It is not known what would happen should the Prime Minister refuse to resign in those circumstances; it could be suggested that the most probable result is a species of civil coup d'etat in which the Prime Minister would simply cease to be acknowledged, his deputy would put a request for the dissolution of Parliament to the monarch, and a general election would be called. To describe such a situation as "highly unlikely" is to understate the odds against it enormously: the conventions governing the behaviour of a Prime Minister are so ingrained as to be comparable to law in terms of their binding effect. That said, they are not actually legally enforceable, and so are arguably only as binding as the Prime Minister chooses to allow them to be. Nonetheless the conclusion must be that the legislature is fused, to a greater or lesser extent, with both the executive (through the House of Commons) and the judiciary (through the House of Lords); and that all three are, in normal circumstances and barring extreme measures, essentially in the control of the Prime Minister and therefore cannot be argued to constitute a realistic check on his power. Without for a moment being outwith the constitutional arrangements of the UK, the Prime Minister is fundamentally unrestricted by his Cabinet colleagues, the will of Parliament, or the decisions of the judiciary. ...read more.

16 The three key premises of the concept of the Rule of Law, a traditional restraint on the power of the government and, therefore, the Prime Minister. 17 The process of Judicial Review could be seen to be quite important in that it allows the judiciary the opportunity to examine the legality of the exercise of the powers of the executive, although the judiciary is traditionally more willing to comment on the use of statutory powers than of common law, or prerogative, powers. In the cases of Council of Civil Service Unions v Minister for the Civil Service [1985] AC 374 and M v Home Office [1994] 1 AC 377 the judiciary ruled on the exercise of executive powers of both kinds, but the point remains that the courts have very little ability to enforce their decisions. 18 See previous notes on Clare Short and the threat of calling a general election. If a Cabinet minister can ignore a binding constitutional convention, why not a Prime Minister? This is a rather frightening potential ramification of the precedent Ms Short established. The previous footnote on the threat of calling a general election goes to illustrate how double-edged a weapon a confidence vote can be. 19 The sovereign and the Crown should not be confused. They can be two separate entities. The sovereign is the individual incumbent of the throne; the Crown is a legal entity holding considerable powers, sometimes embodied in the monarch, sometimes in a Minister, the government as a whole, the judiciary, or another body. Originally, all of the powers of the Crown belonged to the sovereign, but most have been transferred by statute into the direct control of other individuals or institutions. A full discussion concerning the prerogative powers - those by which executive decisions are made under common rather than statute law - can be found in S de Smith and R Brazier Constitutional and Administrative Law. 20 This convention has been unbroken since Queen Anne's reign (1702-1714), though King George V hesitated over the Irish Home Rule Bill in 1914. ?? ?? ?? ?? 1 ...read more.