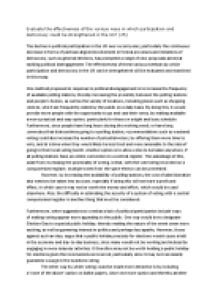 Evaluate the effectiveness of the various ways in which participation and democracy could be strengthened in the UK? (25)

﻿Evaluate the effectiveness of the various ways in which participation and democracy could be strengthened in the UK? (25) The decline in political participation in the UK over recent years, particularly the continuous decrease in forms of partisan aligned involvement in formal processes and initiations of democracy, such as general elections, has prompted a range of new proposals aimed at tackling political disengagement. The effectiveness of these various methods by which participation and democracy in the UK can be strengthened will be evaluated and examined in this essay. One method proposed in response to political disengagement is to increase the frequency of available polling stations, thereby increasing the proximity between the polling stations and people?s homes, as well as the variety of locations, including places such as shopping centres, which are frequently visited by the public on a daily basis. By doing this, it would provide more people with the opportunity to go and cast their votes, by making available a more practical and easy option, particularly for those on a tight and busy schedule. Furthermore, since people have long hours during the working week, or have long commutes that disincentivise going to a polling station, recommendations such as weekend voting could also increase the number of potential voters, by offering them more time to vote, and at a time when they would likely be less tired and more amenable to the idea of going to their local voting booth. Another option is to allow votes to be taken anywhere, if all polling stations have an online connection to a central register. ...read more.

paper, as one is more likely turn up and hastily cast their vote, if they know that they will possibly gain cash prize. Furthermore, since no such concept of shoe leather cost, as there would be under a fines system, people have no reason to cast an informed and proper vote. Another argument against this system is that it is disproportionally attractive to the poor, who would value the incentive offer more than their richer counterparts. In addition, such a system would not work on all citizens who at present are generally politically disengaged, because many of the rich would not feel it necessary to turn up and neither would those who find the prospect of gambling unattractive. Therefore, many feel that the success of such a method is questionable in actually attracting a considerable number of voters, whatever their background, as well as the great levels of cost involved and difficulty of organisation. Additionally, some have pushed for postal voting to become more typical, alongside the option of visiting polling booths. By enabling people to cast a vote via the post makes voting easier and more practical, thereby increasing voter engagement and making it more widespread, particularly since it provides greater opportunities for elderly or disabled people, who cannot easily access a polling station, to vote. Also, the popularity of postal voting is apparent in statistics taken from a recent poll conducted after the all-postal pilots in the 2003 elections, with 67% agreeing that this is an improvement and only 5% who expressed discontent with the system. Furthermore, at the 2005 general election, 12.1% of the UK electorate voted by post, three times greater than that in 2001. ...read more.

Methods involving an increased availability of voting locations, as well as other enabling other voting, such as E-voting and via post, are all practical solutions to general apathy and laziness when it comes to voting in elections in the UK. Such methods do not however address all sections of society, namely the indefinitely apolitical. Furthermore, scheme such as compulsory voting and incentive voting, although increasing election turnout figures on paper, cannot be seen as representing a genuine desire to be politically active and again, the additional voters drawn from such schemes are, for the most part, not very likely to engage in other forms of political participation. In addition, although the notion for making Election Day a public holiday may seem an appealing solution, it is debatable such a scheme could work. And the opportunity cost to the economy will be another factor for politicians to consider. Also apparent when examine the proposed schemes is the prospective monetary cost of implementing them, particularly the incentive voting and E-voting, which includes the high costs of technology. Another issue to be addressed is whether or not it is sensible to lower the voting age to 16, given that much of the younger tier of voters (18-25) who are able to vote, are the least likely group to do so. Furthermore, on the topic of referendums increasing involvement in democratic processes is dubious, since turnout in general, has not been particularly strong. Therefore, all the methods vary in their effectiveness of strengthening public participation in political and democratic procedures. Even though every approach does, to some degree, increase engagement, they all have costs, whether in relation to practicality or money, which need to be considered. ...read more.