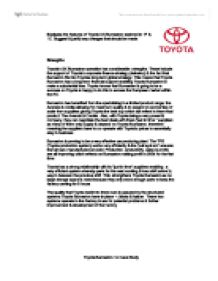 Evaluate the features of Toyota UK Burnaston explored in 1F & 1C. Suggest & justify any changes that should be made. Strengths Toyota's UK Burnaston operation has considerable strengths. These include the support of Toyota's corporate finance strategy (keiretsu) & the fact that Burnaston fits into Toyotas long term global strategy. This means that Toyota Burnaston has a long term financial support enabling Toyota Burnaston to make a substantial loss. Toyota knows that Burnaston is going to be a success so Toyota is happy to do this to access the European market within the EU. Burnaston has benefited from the specialising in a limited product range, the Avensis & corolla allowing for maximum quality & to expand on economies of scale from suppliers giving Toyota the best buy which will reflect in there final product: The Avensis & Corolla. Also, with Toyota being a very powerful company, they can negotiate the best deals with there "just in time" suppliers as many of them only supply & depend on Toyota Burnaston, therefore meaning the suppliers have to co-operate with Toyota's prices to essentially stay in business. Burnaston is proving to be a very effective car producing plant. The TPS (Toyota production system) works very efficiently & the "pull system" ensures that all cars manufactured are sold. Production, productivity, sales & profits are all improving which reflects on Burnaston making profit in 2004 for the first time. ...read more.

Another Weakness & Threat is that Toyota's global executives are becoming prejudiced to European working habits even though Toyota Production Plants at Burnaston & France are positioned in the top 10 for productivity. This could be a huge threat to Toyota Burnaston as the Japanese executives/arbiters of Toyota PLC could abandon the Burnaston Plant & resituate the plant to a place like Asia where wages & running cost are extremely Low. This threat could be easily resolved by presenting the Japanese executives & trade unions who are saying that the workforce at Toyota UK are "lazy" & "less willing to adapt to different jobs" with statistical evidence like "Toyota Burnaston are ranked 8th in Productivity in Europe". The main weakness of Toyota Burnaston is that the cars manufactured at Burnaston: The Avensis & corolla are gradually no longer required by the UK market. This is because of Inflation rates & GDP increasing therefore, People can afford cars which are New, Luxurious & flamboyant whilst People with a lower wage income require something cheap & low cost to run (such as the Fiat Panda starting from just �4,999). Essentially, the corolla & Avensis are slipping between the 2 contrasts of markets in the UK & are in danger of pricing them selves out of the market. Threats The threat & weakness of Toyota is that the market demanding more 'interesting' cars which Toyota see has a big problem. ...read more.

But the increased wage might encourage Toyota PLC to move Burnaston outside of the EU to places such as china & India where running cost is low. Equalisation does not occur, Places such as Poland, Hungary & Estonia which has been recently introduced to the EU in 2004 might tempt Burnaston in moving as there are very low wage but still inside the EU to avoid taxes on exporting there cars. Also, if the UK joins the Euro would make exports Cheaper & therefore lowering the Price of the cars, which may result in more production for Toyota Burnaston. The opportunity of Toyota Burnaston introducing new product lines have already been for filled by Toyota by the introduction of the new Auris. The Auris is essentially designed to improve the image of Toyota by its attractable sharper image & higher specifications. The product lines of Burnaston are only operated by men which might endanger Toyota from employing over 1/2 of the employment population. The main reason why women do not work on the production lines is because most women work part time due to the family commitments they have to do. A possibility for Toyota is for them to employ Youngsters for modern apprenticeships to learn the car manufacturing trade & maybe employ a selected few once qualified. The Burnaston Plant maybe improved by if the senior management were more diplomatic which maybe will improve relations between the workers, creating a more positive atmosphere which will eventually reflect in the final product. ?? ?? ?? ?? Toyota Burnaston 1A Case Study ...read more.