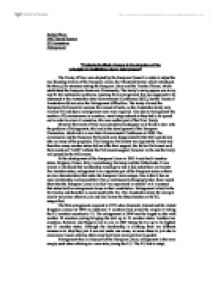 Evaluate the likely changes to the structure of the principle EU institutions due to enlargement&quot;

Rachel Sloan HNC Social Science EU Institutions Enlargement "Evaluate the likely changes to the structure of the principle EU institutions due to enlargement" The Treaty of Nice was adopted by the European Council in order to adjust the two founding treaties of the European Union, the Maastricht treaty, which introduced the three pillar structure setting the European Union and the Treaty of Rome, which established the European Economic Community. The treaty's main purpose was to try and fix the institutional problems, resulting from enlargement, this was supposed to be addressed at the Amsterdam Inter-Governmental Conference (IGC), but the Treaty of Amsterdam did not solve the Enlargement difficulties. The treaty allowed the European Parliament to increase the amount of seats, as the Amsterdam treaty only allowed 732 and due to enlargement more were required. Also due to Enlargement the number of Commissioners in countries, were being reduced as they had to be spread out in order to cover all countries, this was another part of the Nice Treaty. However the treaty of Nice was considered inadequate as id failed to deal with the problem of Enlargement, this lead to the development of the European Convention, which led to a new Inter-Governmental Conference in 2004. ...read more.

The council of ministers will have to make these changes too in order of proper representation of the new countries. The council will have to observe these additional members in all areas including foreign security and home affairs. The European court will also have to take on these changes and will have to ensure that all new countries respect their rule of law. However out of all the institutions the European Parliament will be most affected, beliefs and common values will have to be taken into account by the parliament. The legislative process itself will undergo a series of changes as new countries opinions will be brought forward thus making the process longer. Also the new countries will need funds and these financial needs will dramatically change the allocation of fund in order to accommodate these needs. Due to these changes, enlargement negotiations are usually lengthy and often dramatic. Finland, for example, applied to become a member state on the 18th march 1992 and did not gain membership until 1st January 1995, 2 years and 8 months after their application. However, Finland was one of the shorter waiting times as some of the longer periods go up to 8 years, as in the case of Portugal who waited a period of 8 years and 9 months. ...read more.

Due to Enlargement trade and investment opportunities are ever increasing for example since 1992 UK merchandise trade with the new member states has increased by 392%. It also means that issues such as border controls and other fights again organised crime can be monitored in more depth as all EU countries must meet standards on border controls, police, customs and judicial proceedings before they are allowed to join. One of the most worrying aspects of enlargement for citizens of member countries is their fear of mass migration. But since 1994 Britain has held a positive experience with citizens from other member states filling out jobs that are in labour shortages and very few people are actually seeking benefits from the UK. There are a lot of positive aspects to the Enlargement of the EU but there are however some disadvantages such as the added costs, the cost of public finances, increasing wages due to wage competition and the cost of labour market distribution. This essay shows how enlargement affects the primary institutions of the EU and that enlargement requires all institutions to take on board new ideas and beliefs that the new member state holds. Enlargement advantages and disadvantages on member states have also been evaluated, showing that enlargement has a beneficial role in all countries. ...read more.