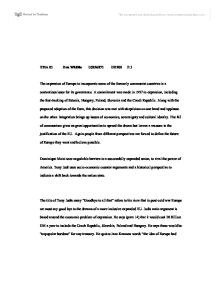 Expansion of the European Union

TMA 01 Dan Whittle U5236871 DD200 P.1 The expansion of Europe to incorporate some of the formerly communist countries is a contentious issue for its governance. A commitment was made in 1997 to expansion, including the fast-tracking of Estonia, Hungary, Poland, Slovenia and the Czech Republic. Along with the proposed adoption of the Euro, this decision was met with skepticism on one hand and applause on the other. Integration brings up issues of economics, sovereignty and cultural identity. The fall of communism gives us great opportunities to spread the dream but leaves a vacuum in the justification of the EU. Again people from different perspectives are forced to define the future of Europe they want and believe possible. Dominique Moisi sees negotiable barriers to a successfully expanded union, to rival the power of America. Tony Judt uses socio-economic counter arguments and a historical perspective to indicate a shift back towards the nation state. The title of Tony Judts essay "Goodbye to all that" refers to his view that in post-cold war Europe we must say good bye to the dreams of a more inclusive expanded EU. Judts main argument is based around the economic problem of expansion. He says (para 14) ...read more.

If the EU could establish its own military reaction to wars like Kosovo, it would be more relevant to the people of Europe. Moisis conclusion is (para 7): "What kind of sovereignty has Europe achieved when sovereignty is not accompanied by ultimate responsibility". Moisi writes about monetary union, enlargement and institutional reform as unequivocal "goals" (para 5). Whereas Judt seems to view them more as options to be tested and debated. Moisi talks TMA 01 Dan Whittle U5236871 DD200 P.3 about them with a sense of inevitability which shows he is emerged in the EU dream. He describes problems which are to be overcome, not impassable barriers. In terms of enlargement, Moisi criticises the EUs rejection of applications from Turkey and the "Engage or Contain" policy on Russia. He hints at a "selfish" motive in the rejection of less applicants who do not fit in terms of religion and budget. He hints at the idea that the more we give to these nations, by way of assistance and friendship, the more we will receive in the long term. The third problem Moisi confronts is identity. ...read more.

The turn-out to EU elections was poor, but so were those for the national parliament. MEPs have seized a lot more power away from beaurocrats, though there is a long way to go on the democratic deficit. The Euro has come about, with residual currencies all but disappearing within weeks. The `inevitability' feeling has spread to even the most right wing politicians in terms of enlargement and pooling sovereignty. Moisi had a harder job in trying to persuade us in the benefits of something in the future, whereas Judt had all of the mistakes of the past to draw on. Moisi still believes in the original dreams of the EU, and Europe is full of people with the willpower to defeat the problems defined by Judt. MEPs are well aware of problems like the failure a two-tier system would be, and they are working on solutions. Extremist nationalism is identified by Judt as an indication of a shift in politics to the right. It should instead be seen as the return to a liberal culture where extremist views are tolerated, but extremist actions are not. The majority will not mind giving up sovereignty if this means more prosperity, and eliminating regional pockets of poverty which breed the intolerance and extremism the EU stands united against. ...read more.