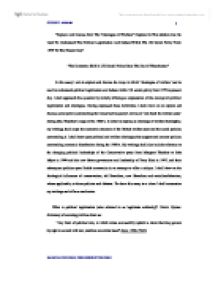 &quot;Explain And Discuss How The &quot;Ideologies Of Welfare&quot; Explored In This Module Can Be Used To Understand The Political Legitimation And Debate Within The UK Social Policy From 1979 To The Present Day&quot;.

"Explain And Discuss How The "Ideologies Of Welfare" Explored In This Module Can Be Used To Understand The Political Legitimation And Debate Within The UK Social Policy From 1979 To The Present Day". "The Economic Shift In UK Social Policy Since The Era Of Thatcherism" In this essay I aim to explain and discuss the ways in which 'ideologies of welfare' can be used to understand political legitimation and debate within UK social policy from 1979 to present day. I shall approach this question by initially offering an explanation of the concept of political legitimation and ideologies. Having expressed these definitions I shall move on to explain and discuss social policy surrounding the Conservatives party's moves to 'role back the welfare state' during Mrs. Thatcher's reign of the 1980's. In order to express an ideology of welfare thoroughly, my writings shall scope the economic structure of the British welfare state and the social policies surrounding it. I shall draw upon political and welfare ideologies that support and counter policies surrounding economic distribution during the 1980's. My writings shall also include reference to the changing political leaderships of the Conservative party from Margaret Thatcher to John Major in 1990 and the new labour government and leadership of Tony Blair in 1997, and their subsequent policies upon British economics in an attempt to offer a critique. ...read more.

Social policies that followed embodied the notion of rolling back state intervention, especially with regard to social security, the National Health Service and council housing. These policies were both explicit and implicit in their emergence and in the origins from the Conservative parties manifestos (Walsh, 2000, Pp52 - 53). The Conservative government continued throughout the 1980's under the leadership of Mrs. Thatcher. In 1990 a change in the Conservatives political leadership changed hands to John Major. Although there was a change in leadership, the strategy of Thatcherite policies ensued, with their profound results remaining (Walsh, 2000, P 53). Ideologically, Mrs. Thatcher never saw herself as being anything but a true Conservative. Some have said Thatcherism can be seen as 'a distinctive reading of Conservative Party history' therefore Thatcherism is not a new ideology simply the accurate interpretation of Conservatism (Aughey, 1983, vol.36 No. 4). Although it is greatly argued to the contrary, with the policies of Mrs. Thatcher's conservative party, although embodying certain conservative thought, ideological emphasis was greatly placed upon Laissez-Faire, capitalism with a hint of new liberalism. Conservatism as an ideology want little change, dominant traditional values are poignant, centering on age-old institutions such as the family and church. ...read more.

New Labours aims of social policy are to 'promote personal autonomy and choice, giving way to allow for individuals to gain the confidence and capability to manage their own lives' (Commission on Social Justice, 1994, P113) these steps are to change the once safety net of welfare into a trampoline (Walsh, 2000, Pp 56 - 57). Ideologically, these steps to reform social policies of 'Old Labour' to 'New Labour' are a far step from the former socialism and new liberal backgrounds. These policies show similarities to Conservatism, Laissez-Faire, with a few Socialist values and new liberal ideologies in place to promote former origins and values. Wrapping up, political legitimation supported by ideologies of welfare in an essay of this size cannot be completely explored. I began this essay by offering definitions of political legitimation and ideologies. Moving on to account the social policies of Mrs. Thatchers Conservative regime from 1979 onwards, outline the eonomic shift from keynesian to montearist economics, and there effects upon UK welfare systems. The essay then proggressed to outline the ideologies of welfare which could be used to offer political legitimantions and an attempt to offer a critique using New Labour polices and there legitmations. Therefore, this essay has attempted to explain and discuss how the ideologies of welfare" explored in this module can be used to understand the political legitimation and debate within the uk social policy from 1979 to the present day. ...read more.

3 Stars - This essay is thorough and well structured, and attempts to construct a logical and coherent analysis of the ideologies and their contribution to political legitimacy.
The essay successfully defines different political ideologies without adequately relating it to actual policy and its effects. There is also little linkage and meaningful comparison of the different elements of the question.