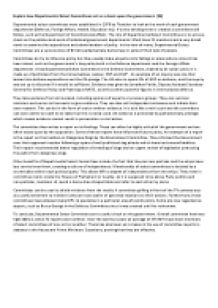 They take evidence from all involved, including opinions of experts or pressure groups. They can summon ministers and senior civil servants to give evidence. They can also call independent witnesses and initiate their own research. This can be in the form of oral or written evidence. It is a bit like a mini court and the committee can even ask for an oath to be taken but this is rarely used. All evidence is protected by parliamentary privilege which means evidence cannot result in prosecution or civil action. The committee then writes a report on its findings. These can often be highly critical of the government and are often seized upon by the opposition. ...read more.

Committees can be used to shield ministers from the media. A committee grilling in front of the TV cameras acts as a useful deterrent to ministers who are now warier of potential reactions to their actions. Furthermore, these committees have allowed many MPs to specialise in a particular area of public policy. Some are now regarded as experts, such as Bruce George in the Defence Committee since it was created until his retirement. To conclude, Departmental Select Committees are a useful check on the government. Overall committee level was high 2001-2, when 72 reports were written. Over the last four years an average of 375 MPs have been members of select committees of one sort or another. There has also been an increase in the use of committee reports in debates in the House and Prime Ministers? Questions, proving that they are effective. ...read more.