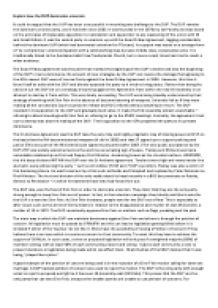 Explain how the DUP dominates Unionism

Transfer-Encoding: chunked ﻿Explain how the DUP dominates unionism It could be argued that the UUP has been unsuccessful in mounting any challenge to the DUP. The DUP remains the dominant unionist party, and it has been since 2003. It was founded in the 1970s by Ian Paisley and was based on the principles of implacable opposition to nationalism and opposition to any weakening of the union with NI and Great Britain. It was the second party in unionism up until the Good Friday Agreement, lagging considerably behind the dominant UUP (which had dominated unionism for 70 years.) Its support was based on a stronger form of ?no compromise? unionism/loyalism with a solid working class but also middle class, conservative vote. It is traditionally linked to the fundamentalist Free Presbyterian Church, but in more recent times has tried to reach a wider audience. The Good Friday agreement was the point that marked the beginning of the UUP?s decline and also the beginning of the DUP?s rise to dominance. No amount of new strategies by the UUP can reverse the damage that agreeing to the GFA caused. ...read more.

Tensions were high and many harder line elements were jettisoning the party ? such as Jim Allister (TUV) and 7 DUP councillors. Paisley was also a victim of this hardening stance. He was forced out by critics such as Dodds and Campbell and replaced by Peter Robinson as First Minister. The hurt and division of this only really raised its head recently in a BBC documentary on Paisley, Genesis to Revelation ? in which he slammed those who had forced him out. The DUP also uses the fear of Sinn Fein in order to dominate unionism. They claim that they are the only party strong enough to keep Sinn Fein out of power. In fact, in their election campaign they bluntly said that a vote for the UUP is a vote for Sinn Fein. As Sinn Fein increases, people vote for the DUP out of fear. This is especially so after issues such as the arrest of Gerry Adams in relation to the disappearance and murder of Jean McConville, a mother of 10 in 1972. ...read more.

For example, Basil McCrea left the UUP to form NI21, yet another unionist party. Unlike the UUP which is a ?broad church? with a Variety of different opinions of all shades (left and right wing) the DUP is much more homogenous and ideologically fixed. It is a conservative party with quite a narrow and clear vision ? socially, economically and politically. Another reason that the UUP has been unsuccessful in halting its decline is that the DUP and UUP agree on many issues and therefore voters see no need for UUP. For voters the distinctions between the two parties are blurred. They are united in their opposition to an Irish language act, they both support grammar schools and academic selection, they both supported the welfare reforms and they were in agreement over most issues discussed during the Haass talks. The UUP has been partially successful in trying to create a new image, but ultimately one of its drawbacks is that it is far too similar to the DUP policy wise. Finally, the DUP have very good vote management with the system of proportional representation. In the most recent election this was evident in the South Belfast constituency, where the two candidates were Emma Pengelly and Christopher Stalford. ...read more.