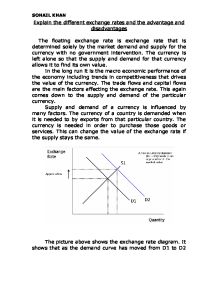 Explain the different exchange rates and the advantage and disadvantages

Countries such as Italy and the United Kingdom have seen this as an effective way to break inflationary expectations in the labour market, in part by the implied reduction in the discretion of national policymakers. Low-inflation countries such as Germany, however, are concerned about whether the ECB would continue to follow the conservative monetary policies of their national central banks. The single European currency�s ease of trade would allow the easy establishment of Trans National Corporations (TNC�s), which in turn would create more jobs for more people on a greater geographical scale. This would mean that benefits would be lowered, as not as many people need to claim them. The money saved from benefits would mean that more money is available for public spending, so public services, such as the NHS would be able to offer more quality services. The above arguments seem to convey a very positive view of the single European currency. But on the other hand, there are many reasons why people believe we should not participate. Firstly, looking at the moral aspects of the argument, the loss of our own currency would be a loss of our heritage, our independence, and our freedom. Many people do not want to see the face of the Queen banished from the head of our coins to be replaced by something unfamiliar and European. ...read more.

There are alternatives: USA and the commonwealth can provide many more goods and services than Europe. A single monetary policy cannot deal with the differences, divergences and cyclical variations in the European economies. National currencies provide an adjustment mechanism, and allow governments to use interest rates to respond to events. A single European currency would remove these options. Instead, a single European interest rate, set by the European Central Bank in Frankfurt, would apply indiscriminately to the whole single currency area. This creates the problem of how a participating country could adjust to a shock or economic development specific to that country. Simply taking a look in the media, it is true to say that the Euro has met its first hurdles. It is failing in many aspects including being very weak against the pound. So would the people of Britain be wise to join a system which is already, within its first year of real operation, facing flaws? I am sure the answer is no. There is great variation in the economic cycles of the European countries involved in the single currency. The unification of these nations under the banner of a crisp Euro note would be confusing for many countries and it would be a long and arduous process until they were all similar. This process would most probably involve high prices, high taxes and increased unemployment for a great deal of time until these problems are rectified. SOHAIL KHAN ...read more.