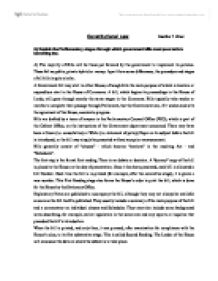 Explain the Parliamentary stages through which government bills must pass before becoming law.

Constitutional Law Madiha T. Khan Q) Explain the Parliamentary stages through which government bills must pass before becoming law. A) The majority of Bills will be those put forward by the government to implement its policies. These fall as public, private hybrid or money. Apart from some differences, the procedure and stages of all bills is quite similar. A Government bill may start in either House, although bills the main purpose of which is taxation or expenditure start in the House of Commons. A bill, which begins its proceedings in the House of Lords, still goes through exactly the same stages in the Commons. Bills typically take weeks or months to complete their passage through Parliament, but the Government can, if it wishes and with the agreement of the House, accelerate progress. Bills are drafted by a team of lawyers in the Parliamentary Counsel Office (PCO), which is part of the Cabinet Office, on the instructions of the Government department concerned. There may have been a Green (i.e. consultative) or White (i.e. statement of policy) Paper on its subject before the bill is introduced; or the bill may simply be presented without any prior announcement. ...read more.

The Matrimonial and Family Proceedings Bill 1983-84 is one example of a bill to which this procedure has been applied. The Modernization Committee has recommended that more use of these committees should be considered. The whole House may consider certain bills at Committee stage. In general, these are bills of constitutional importance - such as the House of Lords Bill 1998/99 - those requiring a very rapid passage, and certain financial measures, including at least part of each year's Finance Bill. If a Committee amends a bill, it is reprinted and allocated a new bill number. The next stage is known as the Consideration, or Report stage. At this stage, the House may make further amendments to the bill but does not consider those clauses and Schedules to which no amendments have been tabled. The Consideration stage provides an opportunity for Members who were not on the Standing Committee to move amendments to the bill, and the delay between Committee and Consideration allows time for the Government to give further thought to some of the points raised during the committee stage, sometimes bringing forward their own amendments in lieu of amendments which were rejected or withdrawn in the Committee. ...read more.

After this speech, only one other MP is permitted to oppose the measure, also for ten minutes. A vote is then taken, and if the Bill is not defeated it moves on to the other stages of the legislative process in the normal manner. Any MP can simply introduce a Bill at any time by giving notice that they intend to do so. Only the most uncontroversial measure can have any chance of success through what is known as the Presentation Bill route, because they cannot receive a second reading if even a single MP objects. One of the best known examples of a Presentation Bill reaching the statute book is perhaps the Protection of Birds (Amendment) Bill, which received all its Commons stages in a mere 67 seconds in 1976. Peers are also able to introduce Bills in the House of Lords at any stage in the parliamentary year, although few avail themselves of this opportunity. However, if a Private Member's Bill in the Lords did manage to get through the legislative process there, the peer sponsoring it would seek to persuade an MP to introduce it in the Commons. If it was similarly successful in the Commons, the Bill would become law. ...read more.