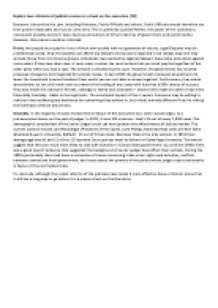 Explain two criticisms of judicial review as a check on the executive.

Transfer-Encoding: chunked ﻿Explain two criticisms of judicial review as a check on the executive. [10] Everyone is bound by the Law, including Ministers, Public Officials and others. Public Officials should therefore use their power reasonably and not act ultra vires. This is upheld by Judicial Review, the power of the Judiciary to review and possibly overturn laws, decrees and actions of other branches of government and public bodies. However, this process could be criticised. Firstly, the people must pay for it out of their own pocket with no guarantee of victory. Legal Disputes may be prohibitively costly. Only the wealthy can afford top lawyers and access to legal aid is not always easy and may exclude those from mid Income groups. ...read more.

In April 2014 the government produced amendments to lower the household income threshold from which you are not able to access legal aid. Furthermore, they made amendments to the civil merits test to prevent the funding of any cases with less than a 50% chance of success. They also made the claimant's friends, colleagues, family and associates ? anyone who might be able to help them financially, basically - liable to the legal costs. The emotional impact of this is severe. Someone may be willing to risk their own wellbeing and livelihood for something they believe in, but it feels entirely different if you?re risking the livelihood of those around you. ...read more.

Baroness Hale is the only woman. In 2012 their average age was 66 and 11 of the 12 Supreme Court justices went to Oxford or Cambridge University. This would suggest that they are much more likely to side with Cameron?s Conservative government. Up until the 1990s there was a good deal of evidence that suggested the background of senior judges does affect their outlook. During the 1980s particularly there had been a succession of cases concerning trade union rights and activities, conflicts between central and local government, and issues about the powers of the police where judges ruled consistently in favour of the centralised state. To conclude, although the recent reforms of the judiciary have made it more effective these criticisms prove that it still has a long way to go before it is a proper check on the Executive. ...read more.