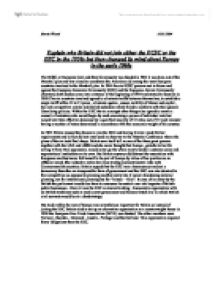 Explain why Britain did not join either the ECSC or the EEC in the 1950s but then changed its mind about Europe in the early 1960s.

Moritz Wiesel 16.03.2004 Explain why Britain did not join either the ECSC or the EEC in the 1950s but then changed its mind about Europe in the early 1960s The ECSC or European Coal and Steel Community was funded in 1952 it was born out of the Marshall plan and was aimed to coordinate the American aid among the west European countries involved in the Marshall plan. In 1955 the sic ECSC powers met in Rome and agreed the European Economic Community (EEC) and the European Atomic Community (Euratom) both bodies came into existence at the beginning of 1956 and started to function in 1959.The six countries involved agreed to eliminate tariffs between themselves, to establish a single tariff within 12 to 15 years , eliminate quotas , ensure mobility of labour and capital , ban anti-competitive cartels and abolish subsidies which failed to conform with their general liberalising policies. ...read more.

But Britain anyway did distrust the association with foreigners and had never felt herself to be part of Europe by virtue of her position as an offshore island. She wished to retain her close trading and sentimental links with Commonwealth countries. Britain argued that the EEC was a bureaucracy and not a democracy therefore an irresponsible form of government and the EEC was also devoted to free competition as opposed to planning and that entry into it meant abandoning national planning, not for international planning but for "laissez - faire". In case of an entry by the British the parliament would also have to renounce its control over vital aspects of British public businesses . Over all was the EEC an inward looking , Eurocentric organisation with un-British traditions such as multi-party government and Roman-Dutch law in which British civil servants would be at a disadvantage. ...read more.

the aftermath of the U2 incident and she also realised that a partnership in Europe might be preferable to dependence upon the USA. In addition did the strength of Commonwealth identity fade away as it grew in size and changed in colour with Asian and African former colonies such as Nigeria and Malaya joining the white former settler colonies of Canada, Australia , New Zealand and South Africa. Anyway the EEC appeared to be a great success and Britain's economy was weakened further and furthermore. So Britain began to have second thoughts about the EEC and eventually decided to make all efforts to join the other six countries and to enter the common market. Thus in August 1961 the Commons , with only twenty-two Conservative abstentions , approved Britain's application to join the EEC. Edward Heath then engaged in negotiations in Brussels until January 1963 when the French President de Gaulle unexpectedly vetoed the British application. ...read more.