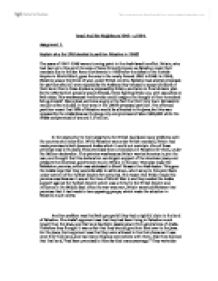 Explain why the UNO decided to partition Palestine in 1948?

Israel And Her Neighbours 1945 - c.1994. Assignment 1. Explain why the UNO decided to partition Palestine in 1948? The years of 1947-1948 were a turning point in the Arab-Israeli conflict. Britain, who had had up to this point the area of land, formerly known as Palestine under their mandate due to the San Remo Conference in 1920 after the defeat of the Turkish Empire in World War I, gave the area to the newly formed UNO in1948. In 1948, Palestine was at the brink of war, under British control, Palestine had several proposals for partitions but all were rejected by the Arabs as they refused to accept divisions of their land. Due to these divisions proposed by Britain, and later on final division plan by the UNO (which actually was enforced), fierce fighting broke out, with casualties on both sides. This was because 'neither side could imagine the thought of their homeland being divided'. Many Jews were also angry at the fact that their holy town (Jerusalem) would not be included in their area in the UNO's proposed partition. The enforced partition meant that 55% of Palestine would be allocated to the Jews, but this was opposed by the Arabs because the Jews only compromised of about 600,000 while the Arabs compromised of around 1.3 million. ...read more.

The Jews were unhappy with the partition because their sacred town of Jerusalem was left a neutral zone controlled by the UNO, and also it was surrounded by the Arab state. Once the UNO left and the partition officially signed, the Jewish army declared their land, "the independent state of Israel". This angered the Arabs even more because it had sealed the partition and had left Israel on top. Due to this, the Jews were expecting to be attacked, and on 15th May 1948, the day after Israel declared its independence under the UNO plan for partition, the armies of Egypt, Syria, Transjordan, Lebanon, Saudi Arabia and Iraq invaded the country. Everyone, including the people of Israel expected the Arabs to wipe out the newly formed Israel. This however was not the case, for the Arab forces were inadequate, ill-equipped and poorly lead with no united command. Another reason was that the Israeli militia, (the Haganah), which was originally formed to help defend against Arab attacks under British mandate, had already been trained by "British military expects" such as Orde Wingate in the arts of anti-guerrilla tactics. Their intense training and the fact that many had fought in World War II alongside the allies, meant that the Arab guerrilla ambush attacks on towns and villages were no match for the battle hardened Haganah. ...read more.

This quotation however is disproved when it says "Zionist extremists embarked on a series of actions designed to drive Arabs out of the area wanted for the Jewish state." Source taken from Understanding Global Issues. This source seems more reliable as it was not written by any side, so therefore has no meaning to be biased. Also, the Jewish claim that they fled is again contradicted by a historian, Benny Morris, who states that she "found no evidence of Arab leaders issuing calls to Palestine's Arabs to leave (...) or any trace of a radio or press campaign urging them to flee." This also helps me to make a conclusion in favour of the Arabs. After gathering my evidence, I think that the Palestinian Arabs fled in terror from the Jews. Although there is evidence which contradicts this, I do not think it is strong enough to have enough influence on my decision. I think that due to the Deir Yassin crisis, people began to fear for their own lives, and news travelled fast "The press and radio spread the news everywhere among the Arabs as well as the Jews." Quoted from Red Cross Official. This caused a wide scale panic and lead to a large amount of the Palestinian Arabs to flee. They and their descendants now live in refugee camps outside Israel. ...read more.