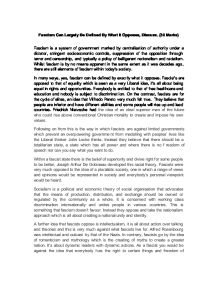 Fascism Can Largely Be Defined By What It Opposes. Discuss.

Fascism Can Largely Be Defined By What It Opposes, Discuss. (30 Marks) Fascism is a system of government marked by centralisation of authority under a dictator, stringent socioeconomic controls, suppression of the opposition through terror and censorship, and typically a policy of belligerent nationalism and racialism. Whilst fascism is by no means apparent in the same extent as it was decades ago, there are still elements of fascism within today's society. In many ways, yes, fascism can be defined by exactly what it opposes. Fascist's are opposed to that of equality which is seen as a very Liberal idea, it's all about being equal in rights and opportunities. Everybody is entitled to that of free healthcare and education and nobody is subject to discrimination. On the contrast, fascists are for the cycle of elites, an idea that Vilfredo Pareto very much felt true. ...read more.

Socialism is a political and economic theory of social organisation that advocates that the means of production, distribution, and exchange should be owned or regulated by the community as a whole. It is concerned with working class discrimination internationally and unites people in various countries. This is something that fascism doesn't favour. Instead they oppose and take the nationalism approach which is all about creating a national unity and identity. A further idea that fascists oppose is intellectualism, it is all about action over talking and theories and this is very much against what fascists live for. Alfred Rosenbourg was intellectual and outcast by that of the Nazis. In contrary, fascists go by the idea of romanticism and mythology which is the creating of myths to create a greater nation. It's about dynamic leaders with dynamic actions. As a fascist you would be against the idea that everybody has the right to certain things and freedom of speech. ...read more.

They were worried that upper classes and working classes conflicting interests would lead to strikes. Corporatism gets those working together for the good of the nation. Corporatism is neither nationalisation nor free market capitalism. It is a half way house in the middle. In Italy there were twenty two regions ad trade unions and business elites were forced to sign contracts which meant that any disputes were signed by the leaders and the state was going to insure that those contracts were honoured and checked. If there was any case of dispute, officials with batons would sort out the problems. To conclude, fascism can be largely defined by what it opposes. It rejects democracy and capitalism amongst other key factors and constitutes that of a state run by one sole individual with people being superior to others. For every fascist core value there is an anti-value which largely confirms the fact it is exactly what it opposes. Everything fascism isn't is in a sense exactly what fascism is. Holly Whiteside ...read more.