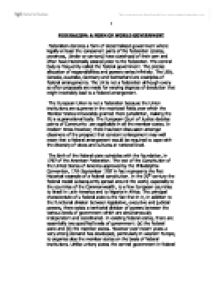 Federalism: a form of world government.

FEDERALISM: A FORM OF WORLD GOVERNMENT Federalism denotes a form of decentralised government where legally at least the component parts of the federation (states, provinces, L�nder or cantons) have statehood of their own and often have historically existed prior to the federation. The central body is frequently called the federal government. The precise allocation of responsibilities and powers varies infinitely. The USA, Canada, Australia, Germany and Switzerland are examples of federal arrangements. The UK is not a federation although every so often proposals are made for varying degrees of devolution that might inevitably lead to a federal arrangement. The European Union is not a federation because the Union institutions are supreme in the restricted fields over which the Member States irrevocably granted them jurisdiction, making the EU a supranational body. The European Court of Justice decides points of Community Law applicable in all the member states. In modern times however, there has been discussion amongst observers of the prospect that constant enlargement may well mean that a federal arrangement would be required to cope with the diversity of views and cultures at national level. The birth of the federal state coincides with the foundation, in 1787 of the American Federation. ...read more.

Within the system is what is called checks and balances. Each branch of the government has the power to inspect and impose limits to the other. This ensures that no branch ever gains too much power. The national government and the state governments co-exist. Therefore, we always have to watch whether some power being asserted by the federal government is in fact allowed under the Constitution and we must also watch whether some power asserted by the states is limited in favour of federal power. Federal government has limited powers. The three federal branches can only exercise powers specifically granted to them by the United States Constitution. The doctrine of parliamentary supremacy found in the UK is wholly inconsistent with a federal form of government, such as that which exists in the United States. In a federal system the authority of the central legislature is limited by that possessed by the legislative organs of the governmental units which make up the federation. However, despite this basic difference between the American and English constitutional systems, we cannot obtain a clear picture of the functioning of federalism in the US since not all federal governmental systems are alike. ...read more.

This explains why in all the world integration processes are under way. Europe is the continent where this process is most advanced. The European Federation will represent the first example in history of the overcoming of the national dimension of the state, and constitutes a unification model for all the regions of the world.4 World federalists recognize that many of the most serious problems facing humanity are beyond the capacity of nations to resolve on their own or by mere coalitions of power between states. A stronger form of unity is needed. Federalism. The question whether federalism is unrealistic can be best be answered in the words of Monet. Bismarck described politics as the art of the possible. Jean Monet a century later updated this notion. Politics he said is the art of making possible what is necessary. POINTS CITED: 1.www.lls.edu.com 2. Collin's Dictionary of Law 2ND Edition 3. Dicey's, Law of the Constitution 4. Jenna Bednar's, Federalism, Judicial Independence and the Power of Precedent [YUN1] KLEOPA VALENTINA 1 Conrad C. The federal government and us 1989 2 Eisenhardt History of Law 3rd Edition 1999 3 www.wfm.com. Cited from the site of world federalists movement 4 Prof. Helmut Kohler, Burgerliches Gesetz, 20th Edition (Translated) [YUN1]WORDS: 1.178 1 ...read more.